Final frontier: How to brave radiation, zero G on the way to Mars

This concluding part on mannedmission to Mars explores the challenges the crew face during the odyssey to and from the Red Planet. 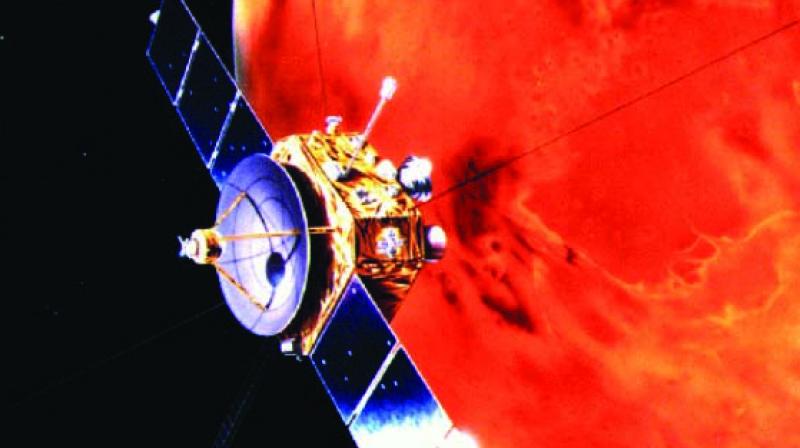 Even with an ambitious schedule, it may take anywhere between 20 and 25 years to meet the challenges.

Long-term human spaceflight presents a difficult set of challenges; unlike robots, humans must be fed, hydrated, protected, entertained, and most importantly, they need to be brought back home safely. There is a saying, “Everything is difficult until you Do”. Similarly, “Without knowing what to do, we can’t do anything”. I will attempt to enumerate the key and important challenges of a manned mission to Mars which are Mission Design, Propulsion System Requirements, Human Health, In Situ Resource Utilisation (ISRU), Crew autonomy, Power system, System reliability and Landing and ascent. We take a look at the difficulties of getting to Mars and staying on to explore the Red Planet. I make a modest attempt to identify the challenges in front of us.

Even with an ambitious schedule, it may take anywhere between 20 and 25 years to meet the challenges. One may recall, reaching Moon and Mars in a maiden attempt was almost an impossible task for any country. However, India could make it at an affordable cost in her first attempts, thanks to international cooperation and good planning. Then why not a Manned Mission to Mars?

The amount of radiation that astronauts would be exposed to on a journey to Mars alone, let alone the return trip, is a major concern. On Earth, we are protected from cell-damaging cosmic rays by a blanketing atmosphere; even astronauts in low Earth orbit are protected from the magnetic field surrounding the planet. Any successful mission to Mars would be an astronaut’s last journey into space, as they would have exceeded the maximum limit for a lifetime of radiation exposure. Crew radiation exposure has been identified as one of the major problems that must be dealt with as the astronauts will be held to the same exposure limits in terms of risk to health that ground-based atomic workers are.

Nominally, for chronic exposure threats, the biggest risk is radiation-induced cancer. There is considerable uncertainty as to the biological effects of various levels of radiation exposure, and how much exposure should be permitted in deep space. As a result, any given point estimate of radiation dose may suggest a predicted mean biological impact, but there is a wide range of biological impacts (lesser or greater than the mean) that could be attributed to that exposure.

Basically two types of radiation hazards exist. First and most dangerous is the probability of a solar proton event i.e. a sporadic production of energetic protons from large solar particle events which is likely to occur during any Mars mission. Solar particle events SPEs occur when a large number of particles, primarily protons, move through the solar system. These events happen during periods of increased solar activity and appear to correspond to large coronal mass ejections.

Allowable exposure: Because the biological effects of exposure to space radiation are complex, variable from individual to individual, and may take years to show their full impact, the definition of allowable exposure will always include some subjectivity. Aside from the difficulty in quantifying the biological impact of exposure to radiation in space, there is also subjectivity in defining how much risk is appropriate. Presently, there are no guidelines for allowable radiation exposure in deep space. Most of the existing data and understanding of radiation effects relates to X-ray and gamma-ray exposure, and relatively little is known about continuous low dose rate heavy-ion radiation.

It is a known fact that the human body undergoes certain changes when exposed to extended periods of weightlessness — changes that are most debilitating when the space traveller must readapt to gravity. The most serious known changes include cardiovascular deconditioning, decreased muscle tone, loss of calcium from bone mass, and suppression of the immune system. A variety of countermeasures for these conditions have been suggested, but none have been validated through testing over a long term.

The experience with astronauts and cosmonauts who spent many months suggests that if the crew is not provided with artificial gravity on the way to Mars, they will arrive on another planet physically weak. Artificial gravity is often put forward as a possible solution. In this case, the entire spacecraft, or at least that portion containing the living quarters for the crew, would be rotated so that the crew experiences a constant downward acceleration that simulates gravity. It is generally assumed that the Coriolis effect (the dizziness caused by spinning around in circles) will fall below the threshold of human perception if the spacecraft is rotated at a slow rate. It is not known whether simulation of full terrestrial gravity is required to counteract all of the known deconditioning effects of weightlessness, or whether the small residual Coriolis effect will cause some disorientation in crew members. No data from a space-based facility exists.

The principal difference between Mars exploration and previous space ventures is the requirement for crew operations in an environment where on-call communications, assistance and advice from ground controllers is not available in emergencies due to the communications delay. This leads to a set of operations requirements that the crew will be able to perform autonomously time-critical portions of the mission. Highly reliable, autonomous system operations should be possible without intensive crew participation. A balance must be struck between ground control and the crew on Mars which optimises the crew’s time and effectiveness. Crew self-sufficiency is required because of the long duration of their mission and the fact of their distance from Earth. The crews will need their own skills and training and specialised support systems to meet the new challenges of the missions.

A descent stage has to be developed for delivery of all hardware systems, the habitats, ascent vehicle, propellant production plant, and other surface cargo to reach the surface of Mars. The role of this stage is to complete the descent to the landing manoeuvre and to manoeuvre the surface systems into the appropriate relative position at the surface outpost. The descent stage may consist of four subsystems: a basic structure to which all other elements (including payload) are attached, a parachute system to assist in slowing the stage, a propulsion system to slow the stage prior to landing, and a surface mobility system. The use of parachutes has been assumed to help reduce the descent vehicle’s speed after the aeroshell has ceased to be effective and prior to the final propulsive manoeuvre. Sufficient atmosphere is present for parachutes to be more effective than an equivalent mass of propellant.

The propulsion system employs engines to perform the post-aero capture/or deboostburn and to perform the final manoeuvre, prior to landing on the surface. Once on the surface, the lander moves limited distances to compensate for landing dispersion errors and move surface elements into closer proximity.

When the surface mission has been completed, the crew must rendezvous with the orbiting Earth Return Vehicle. This phase of the mission is by the Mars Ascent Vehicle (MAV) which consists of an ascent propulsion system and the crew ascent capsule. The MAV is delivered to the Mars surface atop a cargo descent stage. The ascent propulsion system is delivered with its propellant tanks empty. However, the same descent stage also delivers a nuclear powersource, a propellant manufacturing plant, and several tanks of hydrogen to be used as feedstock for making the required ascent propellant. This approach was chosen because the mass of the power source, manufacturing plant, and seed hydrogen is less than the mass of the propellant required by the ascent stage to reach orbit. Not carrying this propellant from Earth will give the mission the flexibility to send more surface equipment to Mars or to use smaller launch vehicles or some combination of the two options.

The crew rides into orbit in the crew ascent capsule. Life support systems are designed for the relatively short flight to the waiting ERV. The ascent vehicle will need to use locally sourced oxygen and methane to lift the payload from the Mars surface to orbit. Then the vehicle will dock with the inspace propulsion and deep space habitat in the Mars orbit to travel back to Earth orbit where it will safely land the crew back on Earth’s surface. In case of a mission abort due to any contingency it becomes necessary to remain in the Mars vicinity for a considerable length of time (typically 500±600 days, depending on specific launch date) before attempting to return.

The Life support for an additional 500±600 days must be added to the Earth Return Vehicle to support the crew in orbit for that period, thus driving up the mission mass and cost. The requirements for fail-safe life support for a crew will be very significant and challenging. The crew will be exposed to excessive radiation for the additional 500±600 days in orbit, having lost the benefits of (a) shielding by the planet from below,(b) shielding provided by the atmosphere, and (c) possible use of regolith piled on top of the Habitat as shielding.