After completing her Master’s, she joined the Centre for Earth Science Studies (CESS) in Trivandrum as a junior scientist. 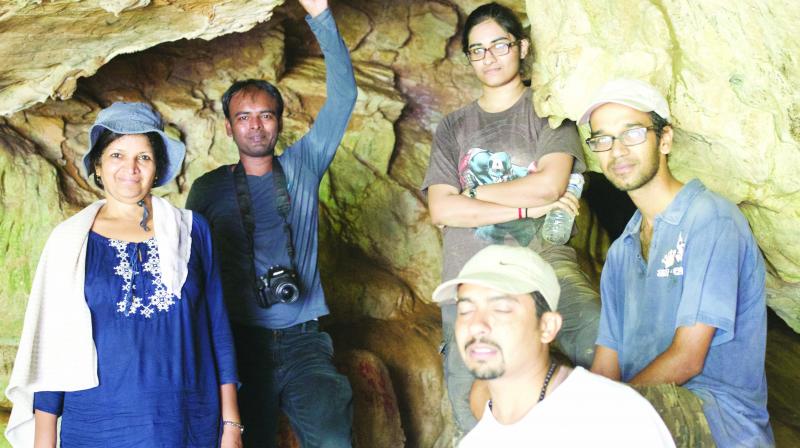 Groundbreaking: Earth scientist Kusala Rajendran with her team in Nepal.

It was not uncommon, a few decades ago, to hear women being referred to as the “weaker sex”. It was generally assumed that women were not tough enough to rough it out. Strong and fiercely independent women over time have shattered this misconception. Earth scientist Kusala Rajendran was one among them.

Kusala, who possesses a degree in applied geophysics and is a professor at the Centre for Earth Sciences at the Indian Institute of Science (IISc) has spent many years studying earthquakes in the Indian subcontinent and surrounding areas. Her pioneering work in the field was recently recognised, as the Ministry of Earth Sciences conferred on her the first National Award for Women Scientists. She has studied every major earthquake that has rocked the country. From the 1993 Latur earthquake to the destructive 2001 Bhuj earthquake to the 2004 Indian Ocean earthquake and tsunami, she has seen and studied them all. Her thirst for understanding this catastrophic natural phenomenon has also taken her to the Himalayas, Nepal, and even treacherous terrains along the India-Pakistan border. However, she confesses that studying earthquakes wasn’t always her passion.

Born in a small village in Kerala, the ninth of 10 siblings, Kusala never imagined she would pursue a life of adventure. In fact, in college, her heart was set on Chemistry, but the advice of her astute sister prompted her to explore Geophysics. The very first applied Geophy-sics lecture she attended at the University of Roorkee captivated her curiosity, and from then there was no looking back. “In the opening lecture, my professor Vinod Gaur, a renowned seismologist, explained the prospects of Geophysics. The excitement of doing something new, something that mattered, made me quit Chemistry,” explains Kusala. She remembers being the only female student in her Master’s programme as not many girls took up the subject back then.

After completing her Master’s, she joined the Centre for Earth Science Studies (CESS) in Trivandrum as a junior scientist. But the thirst to study further took her to the University of South Carolina, where she pursued her PhD. It was around this time that she started exploring the phenomenon of earthquakes. “I was working on the process of earthquakes and how reservoirs trigger earthquakes. My five years of studying at the University of South Carolina kindled my passion.

I became stronger and more motivated to do things,” reveals Kusala. When she and her husband, C.P. Rajendran returned to India in 1993, they realised two things: firstly, that an earthquake had occurred in a region (Killari) that had no known history of earthquakes and secondly there weren’t many experts studying earthquakes in India. The twin realisations prompted them to embark on a research project. Since then, they have conducted several such research projects, have published over 40 papers and have been cited countless times in seismolgy-related publications.

But recognition didn’t come easily, as Rajendran has had to put herself through gruelling fieldwork. One time, when her team was conducting research in an area close to the Indo-Pak border, she remembers having to brave many physical discomforts. “The terrain was rough, there were no toilets, no fancy hotels, plus, there were occasional periods of unrest between the two nations. The men had to sleep on bunkers, while I slept on a dining table,” she laughs. “You don’t worry about physical discomfort because you’re pursuing something. The excitement of pursuing something nobody has gone and looked at before gets you through the most difficult times,” she adds.

Today, she narrates stories of her adventures to her students in a bid to inspire them. She is also happy to see an increase in the number of female students taking up earth sciences. “Even in today’s world, it is difficult for women to pursue their passions because of societal pressures.

That’s why, when any female colleague congratulates me on this award, I always tell them that this award is for every woman who is working hard to pursue her career,” concludes Kusala.