Spin doctor: A spin for the fidgety soul

Fidgeting is an involuntary but relentless activity that we all indulge in, be it biting nails, tapping foot, or clicking a pen. 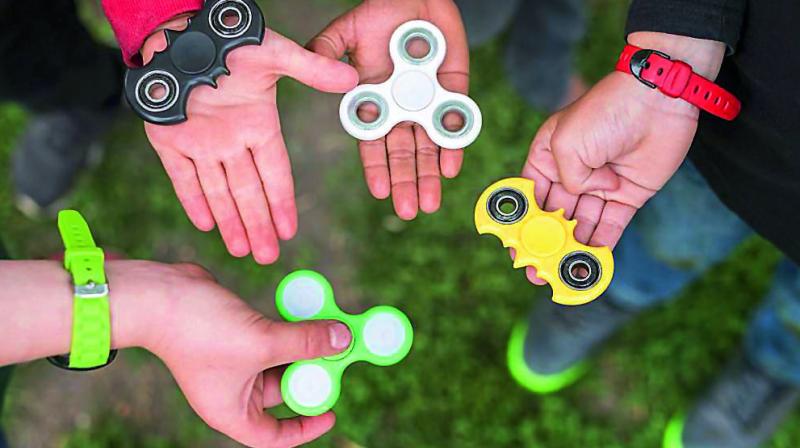 The fidget spinner seems to have an apex spot on the Amazon India bestseller toys’ list.

Taking the urban youth by a spin, fidget spinners have taken the world by storm and found their way into our pockets. What is it about these miniature wonders that have taken everyone for a spin.

One can call fidget toys a boon for human fingernails, which would otherwise have been mercilessly chewed in boredom or nervousness. It has been called “the must-have office toy for 2017” by The Economist, Forbes, Le Monde and other top publications. In fact, a quick online search will tell you that almost all big business publications have written about them because they are such as huge commercial success.

The fidget spinner seems to have an apex spot on the Amazon India bestseller toys’ list. In fact, the craze is such that one doesn’t even need the toy physically at hand — you can spin one on your mobile screen. A number of mobile applications are available for both Android and iOS mobiles. Monetary success is, of course, followed by innovation (and vice versa). Advertised as harmless toys to play with in order to relieve your nervous energy, these spinners beg the question: Can a toy really help you deal with a mental health issue?

Fidgeting is an involuntary but relentless activity that we all indulge in, be it biting nails, tapping foot, or clicking a pen. While for some it is a way to dispel excessive energy, for others it can be a manifestation of anxiety.

However, with no concrete research to rely on, it cannot be considered a prescribed tool of medication, says Dr Maneet Walia, clinical psychiatrist, Credihealth.

“A fidget spinner is just a mechanical tool that creates a hypnotic effect, helping one to deal with minor stress and anxiety, which everyone faces in day-to-day life. But it cannot be used for severe disorders.” She says that to deal with anxiety and nervousness, “people tend to develop behavioural symptoms like biting lips or nails, playing with hair or jewellery, inability to sit still, hand-wringing or tapping-fingers on a surface. All these symptoms could be avoided with the use of a fidget spinner. However, it is not a permanent solution for any kind of a medical condition”.

Keeping in mind the temporary benefits of a fidget spinner, one wonders if they can be used to help children who have autism or attention deficit hyperactivity disorder (ADHD). Dr Walia, who deals with such kids on a regular basis, said, “These toys can help kids who are suffering from conditions like autism and ADHD in a way, but they are inefficient in curing them.”

Although fidget spinners have been around for a long time, 2016-17 saw a spurt in their popularity. Today, they come with sound and light features, making them more interesting. A version of these toys called fidget cubes are another craze in offices these days. The six sides of the cube provide you with six different ways to stimulate your bored energy into a passive expression. Remember switching the bedside lamp on and off repeatedly while thinking? You may find this benefiting you in a similar fashion. Khwaish Hingad, a media graduate who bought a simple fidget spinner for fun, said, “I wanted to use one and see what the big craze was about. However, within two days I got bored of it.”

On the other hand, Khevna Pandit, a features writer, feels that buying a fidget cube was one of her better decisions. She says, “If you have a problem of anxiety or fidgeting, then it’s a really useful tool. For me, it worked because I have a habit of shaking my legs or doing some other random activity. I guess fidget spinners help you to channelise your energy.”

At the end of the day, fidget spinners are just toys that can be used in either constructive or destructive ways, depending on the person who is using them.