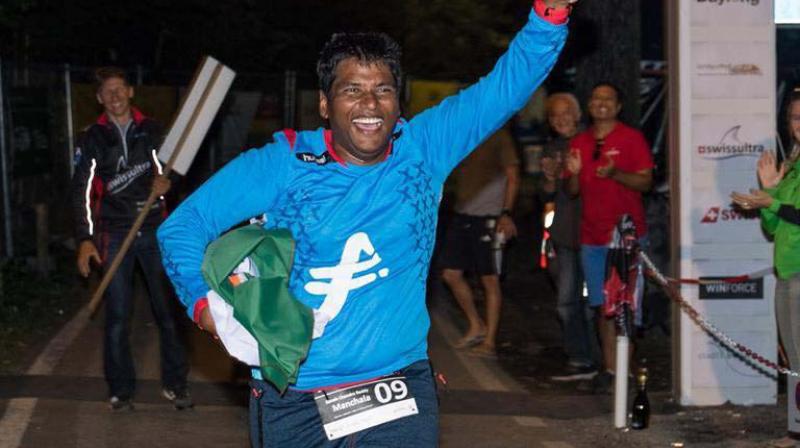 Sure, running for 30-40 minutes or doing some weights in the gym or playing your favourite sport is a nice bit of exercise for that “feel good” factor. But some people require a little bit more of a challenge. Like cycling for thousands of miles. Or running a triathlon... or three or four or TEN! Yes, TEN!!

Heard of Full Ironman, right? A 3.8 km swim, followed by a 180 km bike ride, followed by a full 42.195 km marathon? All to be done in one go. What if that wasn’t enough? What if the only way to push yourself is to do it at twice the distance? Or three times? Or four? Or ten?

Or let’s say you’re completely insane. Then you should put your name in the hat for the Deca Ironman: 38 km of swimming, 1,800 km of biking, 422 km of running. All in 14.4 days or 345 hours. THEN YOU DIE AS A WINNER. That’s the reality of a Deca Ironman Triathlon — an ultra triathlon 10 times the distance of your usual Ironman race.

Sarath Chandra Manchala belongs to this insane breed of athletes. A business school graduate from Frankfurt, he became the first Indian to complete the Deca Ironman last week. He says, “The challenge of endurance races goes beyond a simple calculation of mileage and often into psychological territory unknown. There’s an appeal in such challenges that lures me to endure such hardship and to be rewarded by such an achievement. The only way to truly understand ‘the why and your own why’ is to take part in these events. There are moments of light and dark where pain gives way to a vivid moment of excitement.”

You think you’re strong, fit, healthy, in great shape, and it’s apparent to everyone around you. Problem is, the world includes a lot more athletes. You can bet there’s someone out there who is stronger, trains harder and can outlast you. So, how do you challenge your body, improve your game and determine where you stand? Let your mind and body act in unison to surpass the only challenge — YOURSELF!

Endurance races change individuals beyond their initial motivation and that “to really know where the road leads, is to take that road yourself. One marathon may not be enough to provide some with the satisfaction after completion and that coupled with a new inner belief that there is more ‘in the tank’ which leads inevitably onto higher stakes. These races have helped me to discover and know more about myself”, says Sarath Chandra.

He adds that the level of extremity should not be underplayed in such races. Each day one must be healthy, physically and mentally, as at the start of the race.

Being the only Indian to have done a Double Ironman, Quintuple Ironman and Deca Ironman, Sarath has now set his eyes on Double Deca Ironman, summiteering the highest peak in each continent, Antarctic Expedition, Arctic Mile Swim and Atlantic Rowing Challenge.

There will be peace in knowing that you can go to that dark place and emerge unscathed (if not stronger) on the other side. Just know that anything is achievable… you've got two feet, heart, and lungs and off you go.