A blog and digital project records accounts of microaggression or subtle slights faced by minorities all over. 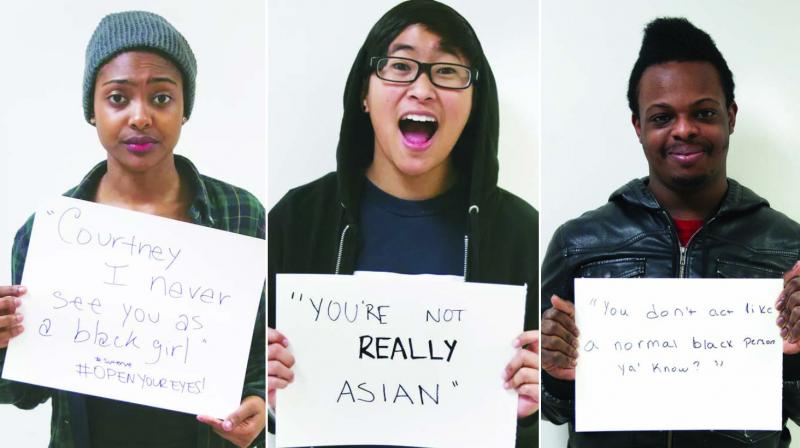 A blog and digital project records accounts of microaggression or subtle slights faced by minorities all overAn African-American being mistaken for a waiter, Asians and Latinos praised for speaking English fluently without any accent and Muslims being stereotyped as terrorists — these are stories shared on the blog Microaggression — Power, Privilege and Everyday Life by the victims of the subtle or covert form of prejudice and racism. The blog, which was started in 2010 by four students of Columbia University, has gained popularity with 20,000 followers on Tumblr and around 11,000 on Facebook. So far, the site has more than 2.5 million views from 40 different countries. The blog seeks to provide a visual representation of microaggression, a term coined by Chester Pierce in 1970, to describe the subtle and stunning put-downs experienced by minorities.

Kimberly Ashby, the co-creator of the site, said that they receive hundreds of submissions every day and over the course of the project, they have got thousands. “Although each event, observation and experience posted is not necessarily striking in and of itself, the slow accumulation during a childhood and over a lifetime is in part what defines a marginalised experience. Minorities face microaggression hourly, daily, weekly, monthly and the blog depicts just how pervasive microaggressions are,” said Ms Ashby. She also cautioned that oppression is happening subtly and covertly and it influences people’s psyches, lives and communities.

On Instagram, a digital photo project started by a Fordham University student also highlights everyday racial microaggression. It features minority students holding placards with remarks: “You are not really Asian, you don’t act like a normal black person, I never see you as a black girl”.

The Fordham University student Kim Kiyun started the digital project Racial Microaggression in 2013 while she was studying about discrimination and racism. The aim of the project is to make people think twice before they speak. “Microaggressions are overlooked. People can brush them off easily, saying they had the best intentions, or that it wasn’t a big deal. Many don’t understand that these microaggressions are subconscious or conscious manifestations of a larger system at play —racism,” said Ms Kiyun.

In 2007, the term microaggression further evolved. The psychologist Derald Wing Sue defined microaggression as “brief and commonplace daily verbal, behavioural, or environmental indignities, whether intentional or unintentional, that communicate hostile, derogatory, or negative racial slights and insults toward people of colour”. Speaking to this newspaper, Mr Sue, author of the book, Microaggressions in Everyday Life: Race, Gender, and Sexual Orientation, said, “Microaggressions are manifested in three forms:  microassaults, microinsults and microinvalidations.  The former is what we call ‘old-fashioned’ racism and is overt, conscious and deliberate.  The other two forms are mo-re unintentional, subtle and outside the level of awareness of perpetrators.  There is a lack of knowledge about microaggression.”

Even the term microaggression hasn’t gained prominence in India; many are sharing their experiences about the subtle form of discrimination. A New York-based journalist Yashica Dutt has started a blog on Tumblr to document various forms of discrimination faced by the Dalits in India. On the blog, documents of Dalit discrimination, people share their stories about the discrimination they have to encounter. On the blog, a Hyderabad University PhD research scholar narrates her experience of facing microaggression. The girl wrote that a teacher told her that she was “lucky” to be a Schedule Caste (SC) as she can get access to higher education and top jobs due to the policy of reservation. The girl had to face cringe-inducing remarks from her teacher despite being a student with a good academic record and getting admission for MA and PhD programmes without availing the reserved seat.

Suryakant Waghmore, the associate professor of Sociology at IIT Bombay, said that caste and prejudice seem to have found a new vocabulary and form. Pointing to some of the matrimonial adverts which state, ‘Caste No Bar — SC/ST, Please excuse’, Prof. Waghmore opines, “Prejudice is also increasingly cast as politeness, which may seem accommodating indeed. The earlier forms of caste rudeness or privilege cannot be practised anymore due to legal checks. These are increasingly cast in newer polite forms.” He also stated that the changing nature of prejudice is not necessarily a sign of declining discrimination as the dominants resort to covert and subtle forms.