Dream machine: The arrival of a flying car 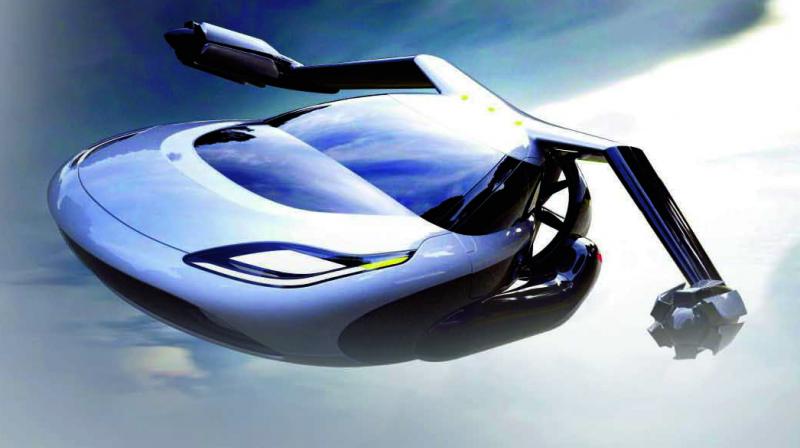 Aviation and auto aficionados have dreamt of combining the capabilities of the plane and automobile into one versatile multipurpose vehicle.

How many of us as children have fantasised about driving a hi-tech car a la Batman or 007 James Bond, which, when an emergency or contingency demands, becomes a flying machine and zooms off into space escaping from the menacing mob or villain?

Aviation and auto aficionados have dreamt of combining the capabilities of the plane and automobile into one versatile multipurpose vehicle. All over the world, especially in the West, automobile and aviation enthusiasts and companies have been experimenting to make the concept a reality.

In fact, numerous short and long hops made by flying cars have been reported in the last two decades. Helicopters of various sizes, endurance and operating ceilings have been flying very effectively for decades in the military and civil domain with out of proportion dividends, especially in adverse terrain conditions.

A big historical car leap was made when French pilot Bruno Vezzoli, almost 50 years after Dick Van Dyke took to the skies in the Hollywood movie Chitty Chitty Bang Bang, crossed the English Channel in a flying car called Pegasus. The aptly named Pegasus (the winged horse of Greek mythology) is powered by a Rotax 912 engine, which allows it to reach a top speed of 97 km/h (60 mph) on the road.  In flight, it travels up to 80 km/h (50 mph) using a pusher propeller.  A flight can last three hours at an altitude of 3,000 metres (10,000 feet) and a range of up to 240 km (150 miles).

Vezzoli set off on June 14, 2017 at 8 am from an abandoned wartime runway in Ambleteuse, a town on the northern coastline of France, between Calais and Boulogne-sur-Mer.  The aircraft successfully landed 50 minutes later in East Studdal, a village near Dover, England.

The car needs only 100 metres (330 feet) to take off and 30 metres (100 feet) to land. The machine travelled at about 45 mph at an altitude of 3,000 metres. The vehicle itself is an off-road buggy that’s attached to stealthy paragliding gear; the idea being it can fly into otherwise unreachable territory, detach the gliding gear and then traverse difficult terrain. The flight itself is a mixture of powered flight and, when closer to the target and stealth is needed, a silent glide.

The Pegasus has been developed by Vaylon, a young start-up that was backed by a French Defence Military grant of 700,000 euros, with basically military use in mind. The French Special Forces helped develop and test it. It was something that appealed to the French military after a 2013 operation in Somalia to rescue a spy went bad due to the helicopter’s loud noise alerting the enemy to their presence — two French commandos died as a result.

The company is planning to sell the vehicle to a multitude of militaries, including the US, and are looking into possible civilian applications. They are already planning to develop the Mk 2, which will be lighter, have two engines (one each for the air and road), to meet environmental standards. Toyota, the German firm Lilium and Urban Technologies, an Israeli firm, and a few others are already testing their prototypes.

Such versatile vehicles that have a three-dimensional capability can overcome surface friction, can carry loads including logistics, weapons and weapon platforms and even glide silently, have immense military and civil employability. Having said that, we must be very clear about their capabilities and performance limitations. Any tasking must be done based on the mission, urgency, risk potential, terrain capabilities, payoffs and implications of failure.

Similar tasks can be prosecuted by our Armed Forces. However, Indian conditions along our Northern and Eastern borders are quite different — high altitude (above 10,000 feet), inhospitable, very few roads, extreme temperatures, high density of air defence network and troops, and fairly active and alert borders. After the initial surprise is lost, tasking has to be meticulously planned and executed. Helicopters can perform most of the tasks with more efficiency, safety and security.

Of course we have to take the vital aspect of air and flight safety, including in the military sphere, into consideration.

We are some years away from exploiting these cars in numbers, especially in the civil sector. But the Flying Car, because of its novelty, exciting military and civil utility potential, is here to stay.