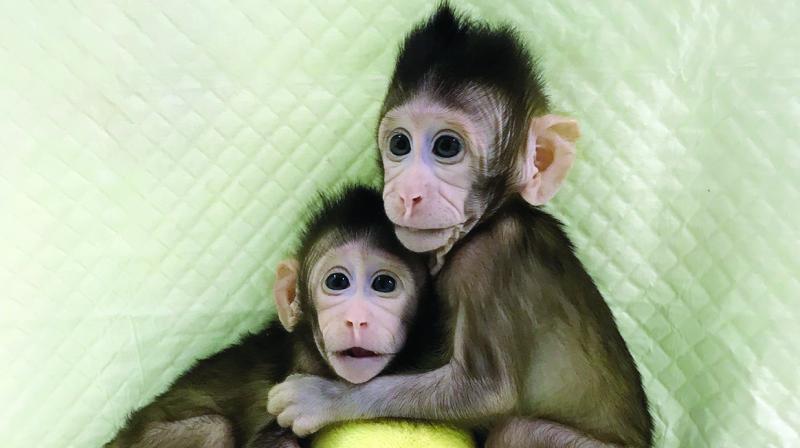 Zhong Zhong and Hua Hua, not one of a kind.

Zhong Zhong, the monkey born a few weeks ago in China, is separated by more than two decades from Dolly, the globally celebrated first-ever cloned sheep. Dolly started life in a petri dish and test tube in a lab in Scotland, and was conceived wholly from a single adult udder cell and implanted into an egg without any DNA of its own. What makes them similar is the procedure, the somatic cell nuclear transfer (SCNT), and the fact that both are pioneering milestones.

The long-tailed macaques Zhong-Zhong and Hua-Hua (Zhonghua is part of the official name for China) were created by growing foetal cells in a petri dish carrying the exact same DNA of the cell-donor monkey, at Shanghai’s Chinese Academy of Sciences. They are the first-ever primates to be cloned. The two were born within two weeks of each other. Reports say they are being bottle-fed and are growing normally. We can expect more Chinese macaque clones in the coming months.

Dolly became a global celebrity, drawing admiration, and fear. Her birth divided world opinion. While scientists were excited by the fascinating futuristic possibilities, it also brought to fore mankind’s primordial fears of transgressing the final limits of Nature. The socio-religious criticism evoked imagery from science-fiction dystopias, warning scientists against undertaking a possible Frankenstein game without a reversal. Zhong, however, was noticed largely by keener followers of science breakthroughs.

After the seminal Scottish breakthrough, scientists across the world not only cloned several mammal species, but have also constantly improved the procedures and efficacy of cloning as a science and technique. We have so far witnessed cloning of 23 mammal species: cats, cattle, dogs, horses, rabbits and rats.

Over 70 countries across the world have explicitly banned any experiment in human cloning, including Australia, Canada, the European Union, the United Kingdom and the United States of America, besides the United Nations.

While India has no particular law banning cloning, general guidelines and procedures surrounding the establishment and conduct of any science work makes it prohibitive. Like many other countries, India too allows therapeutic cloning (reproducing cells and tissues partially) as opposed to reproductive cloning (complete living body) and harnessing of embryonic stem cells for research.

Meanwhile, identical twins Zhong Zhong and Hua Hua have brought back the debate — are humans next?

In a statement, Dr Leonard Zon, director of the stem cell programme at Boston Children’s Hospital said, “…these twins are the first primates ever to be cloned. We are closer to humans than we’ve ever been before.”

There have been others linking Dolly to the Zhong-Hua twins. Critics say this experiment and its success raises ethical concerns by bringing the world closer to human cloning, but others dismiss it.

However, it has not been easy. In the article published in the science  journal Cell, the Chinese scientists released details of excruciating experiments marked by several failures and setbacks along the way.

The Chinese team started its work with cells taken from an aborted female monkey foetus, from which they created 149 early embryo clones. Nearly half did not survive. The embryos that survived were deemed healthy for transfer into uteruses of surrogate monkey mothers. Four such surrogates remained pregnant, but two miscarried. In the end, there were two live births.

Most scientists reacted by saying that the sheer percentages involved in its success as well as the long time it took from Dolly to creating Zhong, is a testimony to the arduousness of the process.

Another danger is the race China might start between nations to be ahead in this new frontier of science. Emerging as a pioneer in gene-editing, China might push harder to be recognised as, and become, a “scientific superpower”.

Writing in the Financial Times, science commentator Anjana Ahuja, said “…China is pursuing a Double World-Class policy. The adorable face of a baby monkey is perhaps the most eye-catching symbol of a nation intent on academic dominance.”

The debate about whether we will soon have a cloned human will now perhaps have a geo-political twist: will it have a Chinese face?