In the return match between Deep Blue versus Kasparov, the machine defeated the man 4.5-3.5. 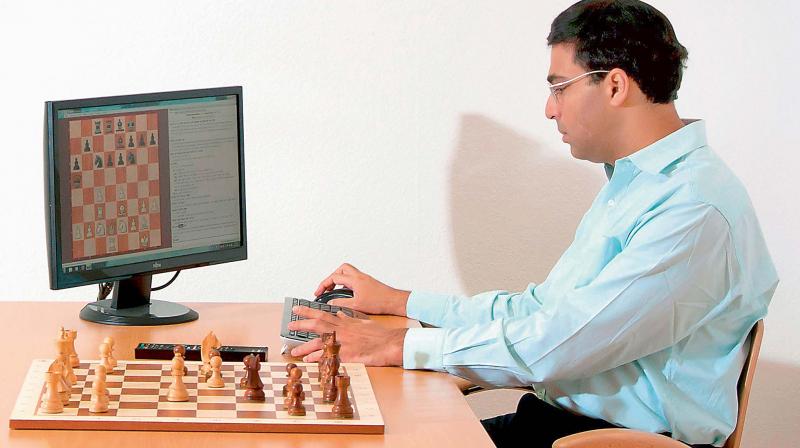 A file photo of Grandmaster Viswanathan Anand playing chess with a computer.

From the time the  supercomputer beat the human in chess, to the present-day Artificial Intelligence, the progress has been nothing short of  spectacular for the machines.

When IBM supercomputer Deep Blue defeated the then world chess champion Garry Kasparov in a six-game match in May 1997, it was very clear to the chess world that machines had finally arrived and could outperform humans at least in the most cerebral of sports.

A little bit on the history of the man versus machine battle will be a useful primer on the subject. Kasparov had played many mini matches with machines in early to mid-Nineties. And, he lost to computer programme Genius in 1994 in a two-game match with rapid time control.

Kasparov took his revenge in 1995 when he beat both Genius and Fritz 4 in two-game matches. In 1996, Kasparov defeated Deep Blue by a margin of 4-2.  In the meantime, another Russian Anatoly Karpov had managed to defeat Fritz in a mini match the same year.

In the return match between Deep Blue versus Kasparov, the machine defeated the man 4.5-3.5. This prompted Kasparov to observe that “in certain kinds of positions, the computer sees so deeply that it plays like God”.

In 1998, Indian Grandmaster Viswanathan Anand defeated computer programme Rebel in a classical time control by 1.5-0.5 margin and restored some pride for Homo sapiens against the machines. But the hardware used in this match was not in the league of Deep Blue.

In the next major non-Kasparov versus machine match of the twentieth century, the then world champion Vladimir Kramnik drew Fritz 4-4. Kasparov was again involved in a major match with the machine in 2003 which also ended in a 3-3 draw.

From then on, the progress has been nothing short of spectacular for the machines. In 2005, GM Michael Adams lost spectacularly to Hydra by a big margin of five points. In the same year, machines defeated top humans by 8-4. Till now, the man versus machine has been more productive for pure hardware power than human brain.

But things took another major turn with chess software making major advancements in this period. By 2009, software Pocket Fritz, running on a mobile phone, won a GM tournament with a superhuman 2898 rating performance.

Nowadays, no top player in the world, barring a handful, would venture to play a chess tournament without a laptop connected to a cloud engine to assist in preparation.

The next big leap is Artificial Intelligence and last year was a breakthrough for the new kid on the block. Google’s Deep Mind, founded by Demis Hassabis, created AlphaGo which learnt Go, a Chinese board game, and won a match against top Go player Lee Se-dol in 2016. In 2017 it defeated the world’s best Go player KeJie.

Deep Mind is currently working on a teaching tool based on AlphaGo. How a machine learns using deep learning will be a mine of information for all concerned. AlphaGo Zero’s lead programmer David Silver explained that it learnt chess by playing against itself without the knowledge of human games played over the years. It basically created knowledge on its own just from the basic principles by repeatedly playing against itself.

Personally, the biggest takeaway for me from the 10 games published by the Deep Mind team is that the AI machine plays for initiative right from the word go, does not shy away from sacrificing material in the opening stage itself and plays for long-term compensation which culminates in complete domination of opponent pieces, ending with a zugzwang like position.

Current world champion Magnus Carlsen also had a similar impact on the human approach to the game when he tried to go into equal positions, away from tonnes of main line opening theory, and relied more on outplaying the humans in a long game.

I believe AlphaGo Zero will have a similar impact on how humans approach the game of chess from here onwards.

(The author is Grandmaster; a former British Open and Commonwealth champion. He runs Chess Gurukul in Chennai).