House of horrors: India fails its daughters again in Bihar

The girls, in their statement to the investigating team, also revealed that they were sedated and raped every night. 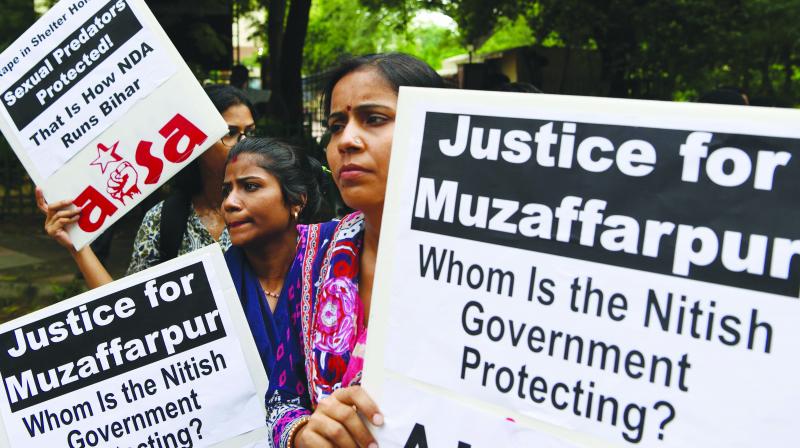 Women rights activists protest in New Delhi on July 30 over the sexual assault of girls at a state-funded shelter home in Muzaffarpur district, Bihar. Police dug up the grounds of the rescue home after allegations that one girl was killed there.

The Muzaffarpur shelter home incident, in which 34 out of 44 girls were sexually assaulted, has not only raised a question mark on the law and order scenario but also made Chief Minister Nitish Kumar’s detractors invoke fear of the return of jungle raj in Bihar.

The Muzaffarpur incident is perhaps the first case in the state in which a brutal mass rape of underage girls between 7 and 17 years took place under one roof. Sources say almost all the victims who were living in the state government’s shelter home being run by Sewa Sankalp Evam Vikas Samiti, an NGO,  had been either rescued from human trafficking or separated from their homes.

Murkier details emerged when the survivors narrated sordid details of torture they went through before being raped by officials and employees of the facility.

The victims, including handicapped minor girls, were subjected to extreme brutality and even thrashed when they tried to raise their voices against employees of the shelter home. One of the victims even showed injury marks to the authorities claiming that they were beaten with iron rods and made to sit naked for hours.

“They used to beat us with iron rods after removing our clothes. We were also made to sit naked for hours on the rooftop whenever we raised our voices,” one of the survivors told the investigating team.

The girls, in their statement to the investigating team, also revealed that they were sedated and raped every night. They also alleged that female employees at the shelter home used to give them sedatives in the name of de-worming and they used to wake up naked, with pain in the abdominal areas.

There are allegations that authorities at the shelter home, in connivance with the administrator of the NGO running the home, had carried out abortion of girls after they became pregnant.

The team investigating the case had earlier recovered medical equipment and sedatives from the shelter home and also found a secret staircase, confirming allegations that minor girls were sexually abused after being drugged. Acco-rding to sources, the staircase could have been used by people who allegedly visited the home at odd hours to sexually exploit the girls.

Reports from Muza-ffarpur suggest that a handicapped minor girl also identified one of the accused as “head sir” in front of the police when she was shown photographs. Earlier, the police had said that the girls used to refer to Brajesh Thakur, the administrator of the NGO, as “head sir”. However, according to sources, several girls have also identified Dilip Verma, chairperson of the district welfare committee, as one of the accused who used to visit the shelter home regularly. Dilip has been absconding ever since the Muzaffarpur police registered an FIR and arrested 10 persons in connection with the case last month.

“People who visited the shelter home with head sir also used to rape us. We used to tell them that it hurts but they ignored our pleas,” one of the victims told the probe team. The conversation between the victim and the investigating team was later aired on several regional channels.

The girls also spoke about the involvement of female employees at the shelter home. They said that most of the female employees were scared of “head sir”. Other survivors not only confirmed the facts narrated by the handicapped victim but also elaborated on the details of torture they suffered. According to them, a female employee, whom everyone addressed as Kiran aunty, was responsible for influencing girls who stayed there.

“Even aunties couldn't save us from the clutches of these men because they were all under the influence of sir (Brajesh Thakur). Chanda aunty was once slapped by sir,” victims told the members of the investigating team.

Sushma Sahu, member of the National Commission for Women (NCW), who had earlier visited the shelter home to meet the victims, said, “There is clear evidence against people who have been involved in the heinous act. We are not concerned whether they are politically connected or not; a crime is a crime and they must be punished.”

Excavation at a shelter home was also carried out last month to trace the dead body of a missing girl. Muzaffarpur SSP, who led the team that conducted the search operation, later told reporters that inmates of the shelter home had alleged that a girl was beaten to death and buried inside the campus after she raised her voice against the employees.

Recently, Chief Minister Nitish Kumar suffered another setback after Sheeba Kumari Singh, wife of Child Protection Officer (CPO) Ravi Raushan who was arrested for his involvement in the case, said that social welfare minister Manju Verma’s husband also visited the shelter home frequently. She also claimed that the minister’s husband used to go upstairs alone while other staff and employees of the shelter home were made to sit downstairs.

“A CBI probe into the case will expose the culprits who used to visit the shelter home frequently. My husband has nothing to do with the case and was doing his work honestly. The police arrested him only to save some of the big guns,” Ms Singh told reporters.

Sciences found sexual assault victims in the Muzaffarpur shelter home. An audit report was also submitted to the social welfare department by the institute.

What baffled the police officials was the attitude of the social welfare department, which sat on the report for over a month. TISS had sent its audit report on March 15 but the instruction letter to the district protection unit was sent only on May 25.