Parents decided not to switch on TV from 7 pm to 9 pm as part of the plan to become the first a ‘serial-freepanchayat’. 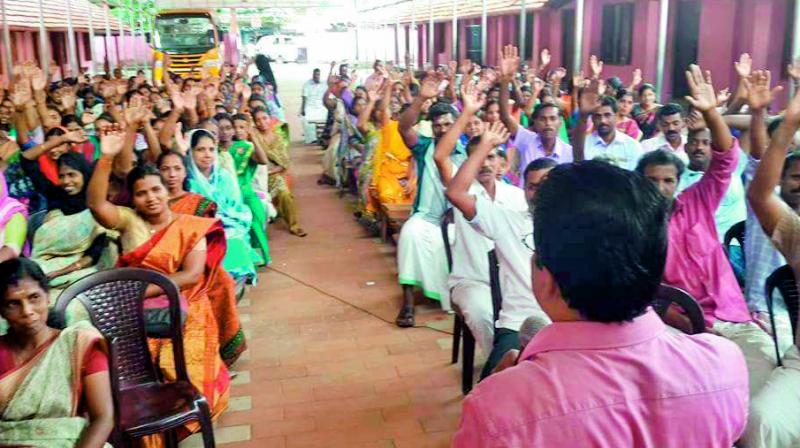 Parents of students at Kalavoor Higher Secondary School take oath as part of campaign of no TV serial at home during study time.

Parents of the students of Government Higher Secondary School, Kalavoor, in Alappuzha district, Kerala, took a vow a couple of years back that parents across India could take. They will not switch on TV sets from 7 pm to 9 pm when serials are aired to create a learning-friendly atmosphere at home. Let the soaps not distract their children, they thought.

And it was a worthy vow. The school achieved cent per cent success in the SSLC examination last year, first time in its history. “Most of our students come from economically poor backgrounds,” said Mr V.V. Mohandas, president, Parent-Teacher Association (PTA). “We had drawn up an elaborate scheme to achieve this result. They coined three slogans: Schoolorukkam (preparedness of school), Veedorukkam (preparedness of the homes) and Naadorukkam (preparedness of the village). The parents decided to not switch on TV sets during the conventional study time from 7 pm to 9 pm as part of our Veedorukkam efforts. We are not against the freedom of expression of the serial-makers nor have we launched a campaign to hate serials. But we had observed that students get distracted from studies due to the addiction of family members to serials. Most parents stood by our collective decision and changed their evening routine of tuning in to the soaps.” Even those who did not agree in the first round were persuaded to fall in line later.

The idea of a ‘Serial-Free panchayat’ was born out of an awareness camp led by Dr R. Jayaprakash, a child psychiatrist at SAT Hospital, Thiruvananthapuram, on Mother’s Day in 2016 as part of the PTA’s efforts to turn the school into a model school. The focus of the camp was on how parents can create a learning-friendly atmosphere at home to build up self-learning capability of school-going children. Dr Jayaprakash, during the camp, explained how the boom of the TV soaps that dominated the evenings of most of the households in the state was becoming a reason for children’s poor performance in academics.

The parents raised their hands and took a vow that they would henceforth not turn on TV sets from 7 pm to 9 pm during the study time. The parents never let the spirit of the decision get dampened, for the children’s education topped their priority in life.

Dr Jayapraksah said his two-decade-long study on kids made him realise that only six per cent students in the state were able to do self-learning properly. “Though the students go to school or tuition centres, they don’t engage in self-learning. It’s only possible at home in the right environment. If the family members huddle around TV sets and enjoy serials in the dining room in the evening, leaving their kids in the adjacent study room, it’s impossible for the children to concentrate on their lessons. It will eventually land students in tremendous mental stress, forcing them to listen to what is happening on the telly,” he pointed out.

“We wanted to raise the point that parents must supervise their children’s academics continuously to inculcate the attitude of self-learning. However, he said there has been no scientific study, except the results in the SSLC examination, that proved the efficacy of the campaign. But the proof of the pudding is in its eating, one would say.