Life story: In letter and spirit

The Reading Room invites people to read out letters with the aim of “bringing back the idea of sharing & experiencing the diverse world of letters”. 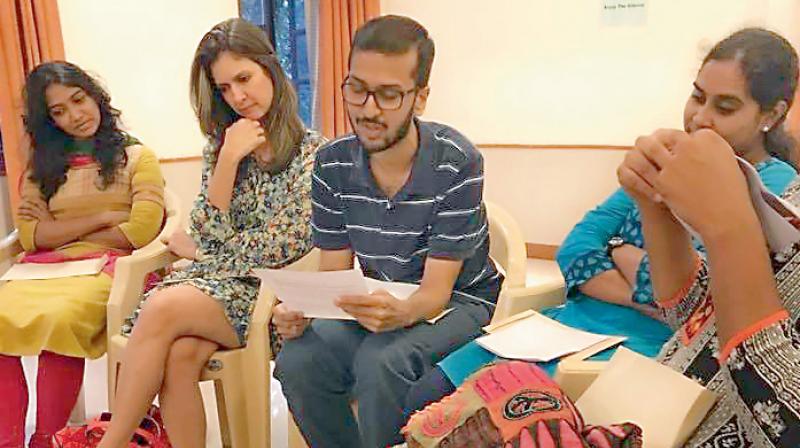 The Reading Room wants to help participants to understand another person’s emotions, experiences and vulnerabilities.

Handwritten letters have become a thing of the past almost with the advent of electronic mail and text messaging. The Reading Room, brainchild of Bengaluru-based theatre artiste Anuja Gholaskar, is hoping to change that by “bringing back the idea of sharing and experiencing the diverse world of letters”.

The Reading Room invites people to read out letters they have received, or written, along with the letters curated by Anuja. She selects the letters, such as love letters written by Karl Marx to his wife, letters written during times of emergency and war, as well as letters on espionage, shipping and science. She then juxtaposes the letters that participants bring alongside the curated letters.

“Both sets of letters are read alongside each other. The letter written by historical figures provide a slice of history. It is important to understand that these letters are a moment in time. What is exciting is that participants are bringing their personal letters. For example, a woman brought a letter that her mother wrote just before she died. That, to my mind, is equally historical,” says Anuja.

Since its inception in February this year, eight shows of the Reading Room have been held in Bengaluru and Mumbai.

As a theatre actor, Anuja was always interested in exploring people’s narratives and that led to the creation of the Reading Room.

“Before the Reading Room, I was working on a theatre project, Lady Anandi, which was the story of my great-grandfather Madhavrao, who was a 19th century theatre actor. I was interested in exploring personal stories, and I thought ‘what if I open up the performance to regular people’s stories’. So I thought ‘what is a good way of accessing those stories?’ The best way to explore these stories was by using the letters received or written by participants as artefacts,” she recalls.

She also hopes that this project will help us understand how the language has changed and evolved over the years and how it is used by different people. “I am interested in hearing the change in a language like the difference between a letter written by an official and a letter written by a mother to her daughter.”

Writing in The New York Times, Catherine Field calls a good, handwritten letter “a creative act, and not just because it is a visual and tactile pleasure”. She says, “It is a deliberate act of exposure, a form of vulnerability because handwriting opens a window on the soul in a way that cyber communication can never do.”

The Reading Room wants to help participants to understand another person’s emotions, experiences and vulnerabilities. “When I picked a letter from my box, I was very apprehensive about sharing deeply personal stuff with a room full of strangers. But when I heard it read out by someone else, it felt like the letter could belong to anyone. Maybe, we all share similar experiences, emotions, love and loss, childhood memories and dreams. Maybe we are all connected by those emotions and dreams,” said Aparna Nori, a participant in The Reading Room.

Shruthi N. Kumar felt she could relate to the writer of the letter that she was reading out.

“I am yet to see a collision of so many emotions in such a small setting. The intonation of the readers, their enthusiasm and boredom being in sync with and also quite contrary sometimes to the words we speak. It was like a musical, with silence being the most profound indicator of when we completely related to the writer, all ten of us,” said Ms Kumar.

As the Reading Room grows in popularity, the participants are bringing letters that unravel deeper personal narratives. “It is a great leap of faith. People are bringing extremely personal letters. One woman brought a letter that she wrote to her aborted child, which is extremely powerful. So these kinds of moments between strangers in the Reading Room are very charged,” said Anuja.

Some of the participants have donated their letters. “After the Reading Room, I ask participants who wish to donate their letters to please do so. Now, I have 80 to 100 letters from earlier reading rooms. So I am creating another archive,” Anuja says.