An experimental setup has been established to recover the waste exhaust heat from the engine’s exhaust using a hybrid silencer. 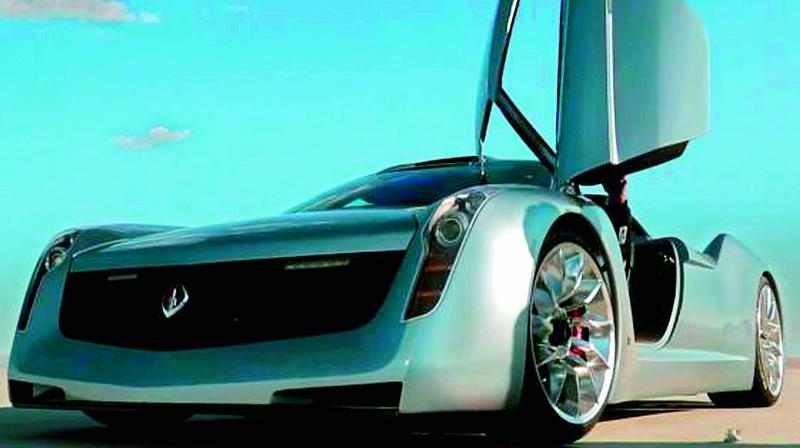 The amazing Jay Leno’s EcoJet which he built in his garage and which was run on biofuels.(Photo: CNBC)

Vehicle Silencer, patented in 1897, is a common automotive component widely and precisely used for reducing the exhaust noise of an automobile. Silencers also cool down the exhaust gases with multiple heat exchanges between the baffles, perforates, wall lining and other components present within the silencer before releasing the hot gases in the atmosphere. In addition to it, the present-day automotive engines run only with an efficiency of 25 to 30 per cent with a lot of energy lost in the form of heat through exhaust gases.

This loss alone is in the range of 35 to 40 per cent, along with the heat lost to engine coolant which is nearly 30 per cent. Utilising only 25 to 30 per cent of energy for mobility and letting the remaining 70 to 75 per cent energy go to waste makes them inefficient. Hence, there is a strong need for and scope to utilise the wasted heat. With the idea of recovering the exhaust heat from the silencer and using it for numerous possible applications, students of Indian Institute of Technology Mandi have taken a step towards the development of energy harvesting silencers using Thermoelectric Generators (TEG).

TEGs, which exist in the form of small rigid plates, have a simple yet unique working system — apply heat on one side, cool the opposite side and generate electricity. TEGs are solid state devices and the absence of moving parts in them have made them a highly reliable option in the field of waste heat recovery. The advancement in the field of thermoelectric in recent years is an indicator of the trust scientists have shown in their utilisation for waste heat recovery. However, low efficiency and the high cost of TEGs are still viewed as a problem by various researchers in this domain, but with increasing advancements in materials used for manufacturing TEGs, the efficiency improvement and reduction in cost are highly inevitable.

An experimental setup has been established to recover the waste exhaust heat from the engine’s exhaust using a hybrid silencer. The word ‘hybrid’ is used here because of its dual functionality — reduces noise but recovers energy. The other important feature of the setup is the fuel used in the engine. The engine uses futuristic fuel; hydrogen is used as a primary fuel for combustion and diesel is used as a support fuel to initiate combustion, thus making it a dual-fuelled engine.

The benefit of using hydrogen is its clean burning nature and high emission reduction, which makes it the most viable fuel for future transportation and mobility application. In our experimental investigation, a net reduction of 50%, 42%, 48% and 38% was observed for carbon monoxide, carbon dioxide, particulate matter and hydrocarbons respectively, with 30% replacement of diesel fuel with hydrogen fuel on the basis of energy delivered. With the existing transportation infrastructure, both in terms of contemporary engines and refuelling stations, the hydrogen-diesel dual fuelled engines can act as a bridge between today’s automotive engines, utilising gasoline or diesel, and the engines of the future utilising hydrogen. 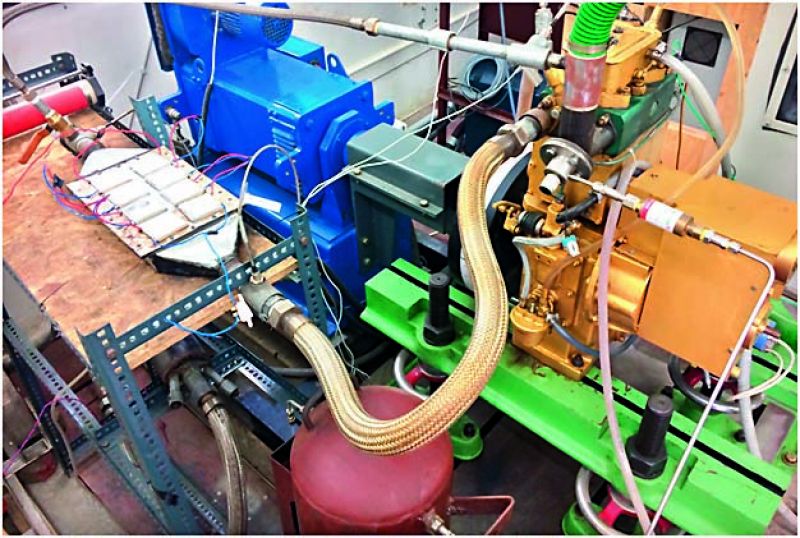 View of the hydrogen-fuelled engine set-up for testing the energy harvesting silencer.

In the present study, a net power of 19 W has been generated with this energy harvesting silencers without any modifications to its internal geometry by using merely 8 TEG modules. The optimisation of the silencer design and further modifications to its internal geometry shows a promising increase in output power. The simulations showed much higher output voltages with optimised internal geometries and better heat exchange between the exhaust gas and the interface where TEG modules are meant to be clamped. All of these happen without defeating the purpose of silencers — noise reduction.

Now that the fraction of wasted energy is harvested and the prospect of TEG-powered energy harvesting silencers is bright and clear, the more substantial utilisation of the produced power should be carried out. One impactful hypothesis can be using this electricity for onboard hydrogen generation.

The energy requirements of the process of Electrolysis to split the water molecule into its constituents, hydrogen and oxygen, can be fulfilled using energy harvesting silencers.

Imagine the production of fuel in the vehicle while on the go! With the high stress demand of conventional fuels to satisfy our transportation needs, there is a need for highly efficient systems along with alternative fuels. The cogeneration of electricity from the hot exhaust gases can definitely give us a leap forward in present energy crisis.