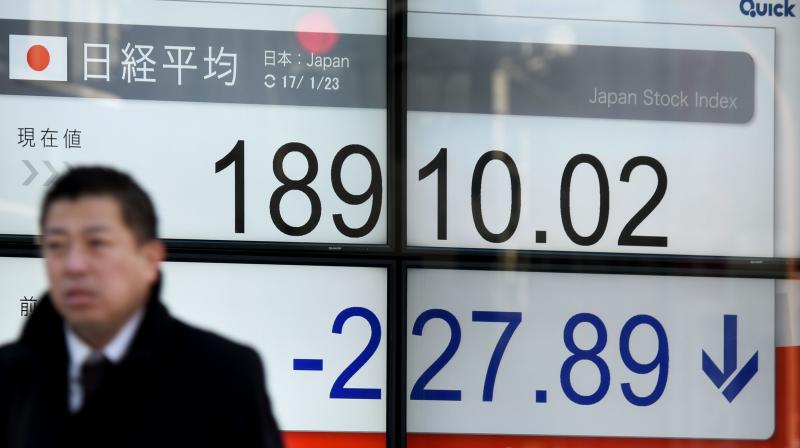 HONG KONG: Asian markets were mixed Wednesday as a rally over the previous two days ran out of steam on profit-taking, with investor confidence also tempered by ongoing worries about the long-term damage that lockdowns are having on the global economy.

Equities have been enjoying a broad advance for several weeks as infection and death rates slow in badly hit countries, allowing governments to lift strict stay-at-home measures that have hammered businesses.

But, while there is a general feeling the worst is past, simmering China-US tensions and a slew of data highlighting the deep wounds being inflicted on economies continues to trouble trading floors.

The World Bank warned the crisis could leave about 60 million in extreme poverty, adding that it saw the global economy contracting five percent this year.

And Treasury Secretary Steven Mnuchin said the US economy could endure "permanent damage" if lockdowns to keep COVID-19 from spreading drag on.

Monday's news of promising results from early trials of a possible vaccine fired a surge across markets. But that has been tempered by a report in Stat News, which focuses on health and medicine, that was sceptical of the announcement, saying it "revealed very little information" and no data about the treatment.

"We are being fairly cautious," Shawn Matthews of Hondius Capital Management told Bloomberg TV. "If you look at the economy, it feels like it's the summer of hope right now, where everyone is hoping it's going to turn around."

In early trade Hong Kong, Seoul and Taipei were slightly higher, while Tokyo finished the morning 0.7 percent up.

But Shanghai, Singapore and Sydney eased 0.3 percent, while Manila, Jakarta and Wellington were also in negative territory.

Investors were keeping tabs on Washington, where House Democrats have passed a $3-trillion aid bill, to add to a similar stimulus already agreed.

But Republicans senators are unlikely to push it through, saying existing measures should first flow through the economy.

And analysts have warned that the deep divisions on Capitol Hill, particularly with elections in November, will likely mean any new deal cannot be expected any time soon.

Oil markets were flat, after snapping a four-day rally Tuesday on profit-taking, with uncertainty about the economic outlook offsetting optimism over the lifting of lockdowns and huge output cuts by the world's biggest producers.

Still, prices were supported by news that US stockpiles had fallen by five million barrels last week.