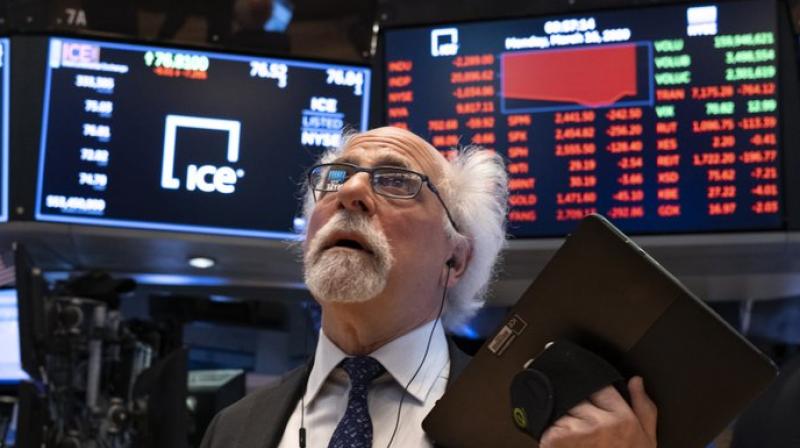 Bangkok: Shares in Asia failed to hold onto opening gains on thursday, skidding further after the latest selloff on Wall Street.

Stocks fell in Tokyo, Sydney, Hong Kong and Seoul in early trading thursday. Investors are in search of cash as fears of a prolonged coronavirus-induced recession take hold.

The losses followed a more than 1,300 point, or 6.3%, decline wednesday in the Dow Jones Industrial Average, which has now lost nearly all of its gains since President Trump's inauguration. The Dow closed at 19,898.92.

Futures for the Dow and the S&P 500 were both down 1.5% early Thursday Asia time.

New York's losses deepened after a temporary halt was triggered in the early afternoon. Even prices for investments seen as very safe, like longer-term U.S. Treasurys, have fallen as investors rush to raise cash.

The New York Stock Exchange said Wednesday it will temporarily close its iconic trading floor in lower Manhattan and move to all-electronic trading beginning Monday as a precautionary step amid the coronavirus outbreak.

Signs that the outbreak's impact will be far reaching and prolonged have undermined efforts to staunch the bloodletting on the markets as investors find themselves without their usual safe havens from risk.

Brent crude, the international standard, was up 59 cents at $25.47 per barrel.

Markets have been incredibly volatile for weeks as Wall Street and the White House acknowledge the rising likelihood that the outbreak will cause a recession. The typical day this month has seen the U.S. stock market swing up or down by 4.9%. Over the last decade, it was just 0.4%.

The Dow, now at its lowest level since 2016, had surged more than 5% on Tuesday after Trump promised massive aid to the economy, but the number of infections keeps climbing, topping 200,000 worldwide.

The S&P 500, which dictates how 401(k) accounts perform much more than the Dow, is down nearly 30% from its record set last month, though it's still above its level on Election Day 2016.

As big swaths of the economy retrench while much of society comes to a halt in an attempt to slow the spread of the virus, investors have clamored for Congress, Federal Reserve and other authorities around the world to support the economy until it can begin to reopen.