In March quarter, merger and acquisition deals valued $12.66 billion were closed against $18.66 billion in the same quarter last year. 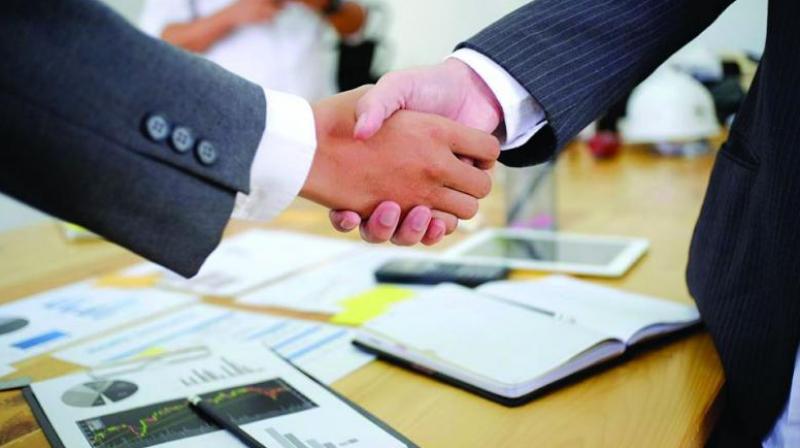 As many as 110 deals were inked in last quarter against 118 deals in the year ago quarter, as per the update from Grant Thornton.

Chennai: Merger and acquisition activity slowed down in March quarter as the total deal value fell 33 per cent and deal volumes 7 per cent against the same quarter last year. Delay in execution of deals, growing complexity in deal structures and macro-economic factors like upcoming elections, global economic conditions, and uncertainty around Brexit had dampened investor sentiment.

In March quarter, merger and acquisition deals valued $12.66 billion were closed against $18.66 billion in the same quarter last year. As many as 110 deals were inked in last quarter against 118 deals in the year ago quarter, as per the update from Grant Thornton.

“Although we entered into 2019 with substantially less momentum with 110 M&A deals worth $12.5 billion compared to 118 deals worth $18.7 billion in Q1 2018, some big deals announced this year, including Arcelor Mittal’s acquisition of Essar Steel for $7.2 billion, Radiant Life care’s merger with Max healthcare for $1 billion has provided some encouragement, that the outlook for M&A will be healthy despite a drop,” said Pankaj Chopda, Director, Grant Thornton India LLP.

Two billion-dollar deals - one each in the manufacturing sector and pharma sector - and 15 deals valued around $100 million each contributed to 93 per cent of the total M&A deal values and 15 per cent of the M&A deal volumes. This demonstrated an appetite for big ticket deals.

Grant Thornton expects deal activity to pick up in the coming quarters. “We expect to see an uptick in the M&A deal activity across domestic, inbound and outbound segments spurred by action from the financial services sector to minimise NPAs, and the US-China trade war being favourable in boosting India’s manufacturing exports,” said Chopda.