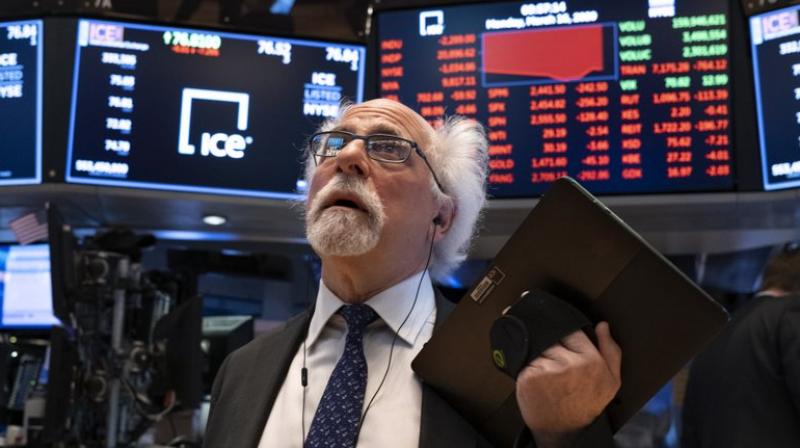 New York: Wall Street stocks had their worst day since 1987 on monday, joining the global market carnage as the coronavirus outbreak shut down a widening part of the US and global economy. The Dow Jones Industrial Average plunged 12.9 percent, or nearly 3,000 points, at 20,188.52.

The losses were the most substantial since worries over a coronavirus-induced recession became the market's preoccupation over the last three weeks or so.

President Donald Trump, for the first time, said the US economy "may be" heading into a recession, acknowledging an outcome that an increasing number of economists are expecting.

Monday's dreary session came after the Federal Reserve announced a series of emergency measures Sunday night, including lowering interest rates to a range of 0-0.25 percent, where they were during the 2008 global financial crisis, and removing reserve requirements to allow banks to use cash backstops to meet unexpected funding needs.

"There is a pyramid of uncertainty," said Quincy Krosby, chief market strategist for Prudential Financial. "And the markets are responding to that."

Boeing, encumbered by the crises over the grounding of the 737 MAX and a major slowdown in air travel, led the Dow lower, shedding a whopping 23.8 percent.

Other big losers included Chevron, Intel, Home Depot, McDonald's and UnitedHealth Group, all of which fell by more than 15 percent.

But the session did include some winners, including Clorox, which jumped 4.1 percent amid strong demand for cleaning supplies and Kroger, which advanced 1.3 percent as more consumer throng to supermarket to stock up