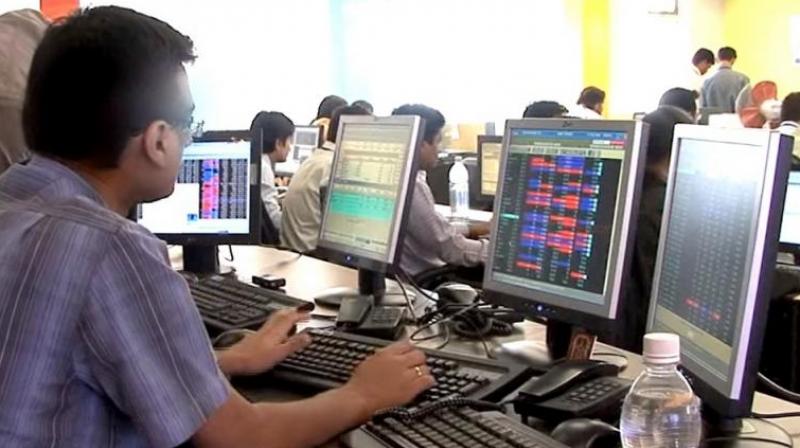 A trader during a trading session.

Mumbai: The new-found optimism spurred stocks to new levels as the Nifty ended at a new peak of 9,160 today and the Sensex notched up minor gains, with liquidity keeping confidence level high.

There has been no let-up in foreign capital inflow after BJP's sterling win in UP and Uttarakhand assembly elections.

Buying picked up after the GST Council yesterday cleared the two remaining pieces of supporting legislation, paving the way for their introduction in Parliament and state legislatures for its planned rollout in July and sparking interest in FMCG stocks.

The BSE gauge had gained 187.74 points in the previous session after the prospects of a gradual approach to US rate hike removed a big uncertainty.

Globally, shares turned weak. Investors were concerned about lack of detail about US President Donald Trump's tax reforms and spending promises in his first budget.

Shares of cigarette makers were in the limelight after the GST Council approved a proposal to cap cess on demerit goods such as tobacco and cigarettes. VST Industries led gains by surging 7.55 per cent. Godfrey Phillips rose too. The same theme played out in the 30-share Sensex kitty.

Cigarette giant ITC Ltd climbed the most by 4.85 per cent, followed by Infosys (1.12 per cent). Other movers were Wipro, Maruti Suzuki, Axis Bank, HDFC Bank and TCS.

"Markets continued to move upwards for yet another session on the back of robust foreign fund inflows, powered by BJP's huge win in UP and Uttarakhand," said Deepak Pahwa, a Delhi-based stock broker. BSE FMCG index gained a whopping 2.41 per cent, followed by realty, IT and technology.

However, broader markets registered a mixed trend, with the small-cap index advancing and mid-cap retreating. Major Asian indices struggled. In Europe, the direction of stocks was mixed. .