As countries gradually ease restrictions in an effort to restart their economies, investors are anxious about a second wave of infections 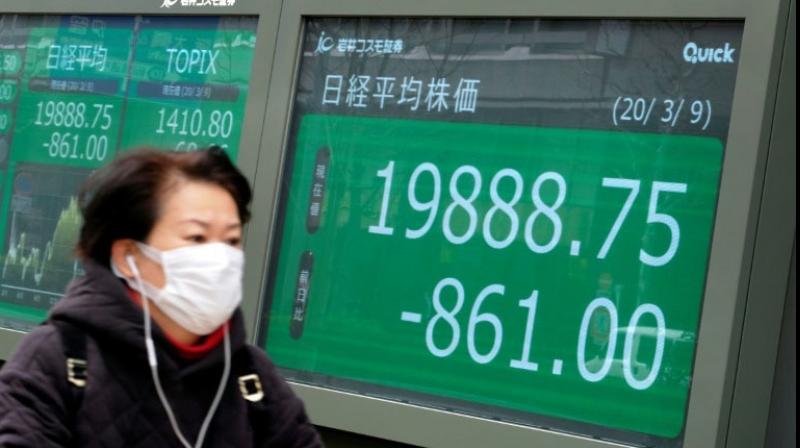 SYDNEY: Asian shares skidded on Tuesday on growing worries about a second wave of coronavirus infections after the Chinese city where the pandemic originated reported its first new cases since its lockdown was lifted.

The central Chinese city of Wuhan reported five new cases on Monday, casting doubts over efforts to lower coronavirus-related restrictions across the country as businesses restart and individuals went back to work.

Hong Kong's Hang Seng index was among the hardest hit down 1.4% followed closely by Australia , off 1.3%. Chinese shares dithered in early trade with the blue-chip CSI300 index  off a shade. South Korea's KOSPI faltered 0.9%.

As countries around the world gradually ease restrictions in an effort to restart their economies, investors are becoming anxious about a second wave of infections.

Germany’s Robert Koch Institute reported that the “reproduction rate” - the number of people each person infected with the coronavirus goes on to infect - had risen to 1.1. Any rate above 1 means the virus is spreading exponentially.

The worrisome news follows a fresh outbreak in night clubs in South Korea and record number of new cases in a day in Russia.

“The re-opening of the global economy will likely follow the shape of activity in China. Businesses there have restarted operations but are not necessarily at capacity,” Bob Baur, Chief Global Economist at Principal Global Investors.

“While businesses have mostly restarted, China’s households stay cautious. Restaurants are open, but seats are empty. Vehicle sales bounced off the bottom but are well below normal. Households in the U.S. and Europe will surely mirror this wary attitude even as activity picks up.”

Fund managers expect equity markets to stay the course through June and avoid retesting March lows given the massive monetary stimulus provided by the U.S. Federal Reserve and other major central banks.

Late on Monday, the Fed said it would start purchasing shares of exchange-traded funds that invest in bonds, one of several tools to improve market functioning in the wake of the coronavirus pandemic.

Markets are also keeping a wary eye on China’s trade relations with the United States as well as Australia.

U.S. President Donald Trump said on Monday he opposed renegotiating the U.S.-China “Phase 1” trade deal while Australian media reported that China has suspended imports from four abattoirs in an escalation of tensions.

On the policy front, investors will be looking to comments from Fed officials. James Bullard and Patrick Harker are due to make remarks at 1300 GMT and 1400 GMT, respectively, ahead of a highly anticipated speech from chairman Jerome Powell on Wednesday.

Overnight, the S&P 500 barely closed higher but the Nasdaq posted its sixth consecutive advance as technology and healthcare shares provided the biggest lift to all three major U.S. stock indexes.

The Nasdaq is now within 10% of its all-time high reached in February.

The dollar rose on Monday as fears of a second wave of infections drove safe haven demand.

As risk sentiment was knocked, the Australian dollar became the top loser, dropping about 0.8% to a one-week low, while its kiwi cousin extended falls.

The euro slipped below $1.08 for the first time in almost a week and the Japanese yen nursed an overnight loss of about 1% to sit at 107.48 per dollar, the bottom end of a range it has kept since mid April.