Business   Market  12 Mar 2021  TV prices to go up from April as open-cell panels get costlier in global markets
Business, Market 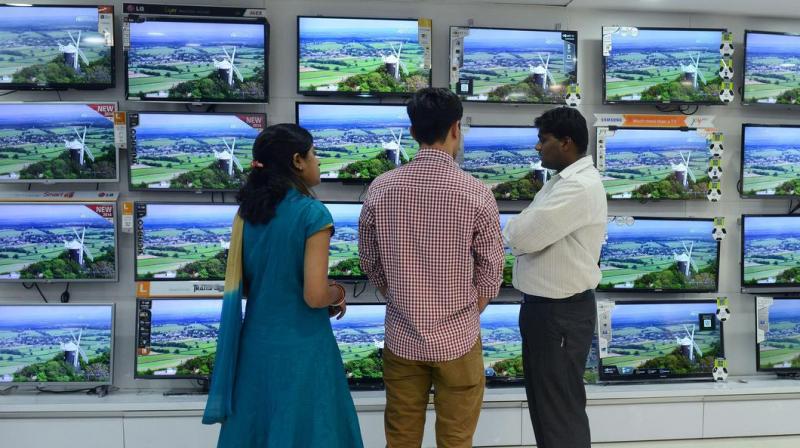 Brands including Panasonic, Haier and Thomson are considering to increase prices from April this year, while some like LG have already raised prices due to hike in prices of open-cell. (Representational Photo: AFP)

New Delhi: Prices of LED TVs are set to rise further from April as the cost of open-cell panels has gone up in the global markets by up to 35 per cent in the past one month.

Brands including Panasonic, Haier and Thomson are considering to increase prices from April this year, while some like LG have already raised prices due to hike in prices of open-cell.

Panasonic India and South Asia President and CEO Manish Sharma said, "Panel prices are rising continuously and so are the prices of TVs. It is likely that TV prices may increase further by April."

When being asked about the quantum on increase, he said, "Seeing current trends, it might go up 5-7 per cent more by April."

Expressing similarly, Haier Appliances India President Eric Braganza said there is no other way than to increase the prices.

"The prices of open-cell have gone up tremendously and the trends are that it would keep on increasing," said Braganza adding that "if that continues, we would have to continuously increase prices".

The open-cell panel is an important part of TV manufacturing and covers around 60 per cent of the unit.

Companies import television panels in an open-cell state, which require further assembling with value addition before being shipped to market for sale.

Super Plastronics Pvt Ltd (SPPL), the brand licensee for French Electronics brand Thomson and US-based brand Kodak, said there is a scarcity of open cell in the market and the prices have almost gone up by three-folds in the past eight months.

"From the past eight months, there has been a month-on-month increase in panel prices, we have witnessed more than 350 per cent spike in LED TV panels. Globally, panel market has slowed down. Despite that, there has been an increase of 35 per cent in the past 30 days," said SPPL Chief Executive Officer Avneet Singh Marwah.

Videotex International, which owns Daiwa and Shinco brands, said the industry has never seen or expected such a price increase of open-cell.

"Since 32 inch is the most-sold size in India, the price of a 32-inch screen size is expected to go up by Rs 5,000-6,000," said Videotex International Group Director Arjun Bajaaj.

While South Korean brand LG said it will not increase the prices of its TV panels.

"We are not going for any price increase now for TV. We have already increased the prices by around 7-4 per cent in January and 3 per cent in February, because of the hike in panel prices," said LG Electronics India Vice-President (Home Appliances) Vijay Babu.

Marwah added that the open-cell market is dominated by Chinese manufacturers and alleged that TV makers from China are getting better prices from them.

"Currently, there is no alternative apart from China where all panel manufacturers are present. It has been closely observed that only Chinese brands are getting better supply and price.

"This has been the narrative especially after the pandemic, where Chinese TV brands, which have been flooded in the Indian market to counter Indian manufacture brands by better price and supply," he added.

The government should bring TV manufacturing under the production-linked incentive (PLI) scheme, a move which will make the Indian TV industry more competitive on the global stage, Marwah added.

Last year, the government had restored the import duty on open cell. It had re-imposed 5 per cent customs duty on the import of open-cell for TVs from October 1, 2020, after having nil duty for a year.

Besides, the government had also put imports of TV under a restricted category from free to promote domestic manufacturing. Now, importer of TV has to seek a licence from the commerce ministry's DGFT for the imports.

TV is one of the largest segments under the entire domain of appliance and consumer electronics, accounting for a volume of almost 17 million with an estimated sale value of almost Rs 25,000 crore.

It further said that the open cell panel and the chips of the TV are predominantly imported from China besides some other markets as Taiwan, Thailand and Vietnam and only the last-mile assembly is done in India.