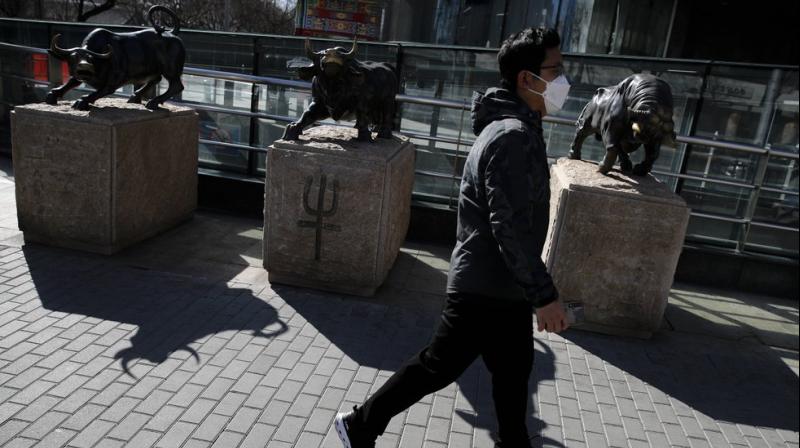 Tokyo: Stocks were mostly lower in Asia on Wednesday despite gains on Wall Street on hopes the Trump administration will act to cushion the economic pain of the Covid-19 coronavirus outbreak.

“Firstly, the details of the fiscal support off the United States remain uncertain at this point,” she said in a commentary. “With the virus reaching the shores of the U.S. in a more significant manner only late into February, the economic indicators from the month could altogether be regarded as backward looking at this point and any disappointments potentially not be taken very well.”

On Wall Street, the day’s moves were a microcosm of the severe swings that have dominated recent weeks. Market watchers say investors want to see a big, coordinated response from governments and central banks to shore up the virus-weakened economy.

The S&P 500 surged as much as 3.7% in the morning, only to see the gains evaporate by midday. The index then bounced up and down before turning decisively higher after President Donald Trump pitched his ideas for a break on payroll taxes and other economic relief to Senate Republicans.

By the end of trading, the S&P 500 was up 4.9%. It erased three-fifths of Monday’s loss, which was the sharpest since 2008, when global authorities banded together to rescue the economy from the financial crisis.

The volatility reflected the mood of a market just as preoccupied with the virus as the rest of the world. Since U.S. stocks set their record high just a few weeks ago, traders have crossed over from dismissing the economic pain created by Covid-19 — thinking it’s similar to the flu and could stay mostly contained in China — to being in thrall to it — worrying that it may cause a worldwide recession.

While they won’t cure illnesses or get quarantined workers back into factories, spending and stimulus programs would put cash into the hands of households and businesses while health experts try to corral the virus. That could stave off or at least moderate a possible recession.

Investors saw glimmers of a coordinated response, which led to Tuesday’s optimism.

At a White House press briefing Monday night, Trump said his administration would be asking Congress to cut payroll taxes and pass other quick measures aimed at easing the impact of the coronavirus on workers.

Treasury Secretary Steven Mnuchin also met with House Speaker Nancy Pelosi, whose support would be needed for any deal in a deeply divided Congress.

In Japan, a task force set up by the prime minister approved a 430 billion yen ($4.1 billion) package Tuesday with support for small to medium-sized businesses. Other governments in Asia have announced billions of dollars’ worth of stimulus and other measures to help protect their own struggling economies.

But as markets waited on Tuesday for details about Trump’s plan, prices oscillated sharply.

After a meeting with major health insurers, Trump said the government is working with the cruise line industry, one of the hardest hit by the virus. That helped lift the market, which had earlier flipped to losses amid doubts that the government would announce anything soon.

Treasury yields pushed higher on Tuesday but fell back early Wednesday. The bond market rang warning bells about the virus long before the stock market, and a rise in yields signals fear has receded a bit.

That pulled the market a bit further from the brink of a bear market, signified by a drop of 20% from a record. The S&P 500 is down 14.9% from its high. If it can rally back to that point, it would extend the longest-ever bull market, which began its climb after the market hit bottom on March 9, 2009.

Oil prices, which plunged 25% on Monday amid a price war between producers, have steadied in the past two days.