US crude oil production remained at the record 11.9 million barrels per day (bpd) it reached in late 2018. 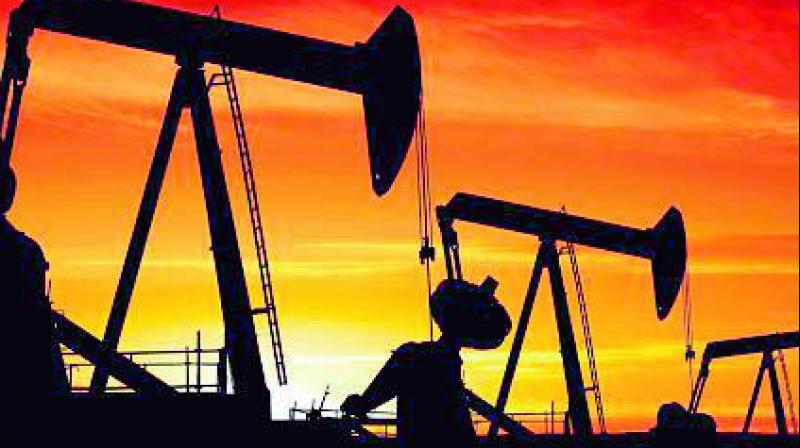 International Brent crude oil futures were down by 26 cents, or 0.4 percent, at USD 62.43 per barrel.

Singapore: Oil prices fell on Thursday after US crude inventories rose and as production levels in the country held at record levels, but OPEC-led supply cuts and Washington’s sanctions against Venezuela supported markets.

International Brent crude oil futures were down by 26 cents, or 0.4 percent, at USD 62.43 per barrel.

US crude oil inventories climbed by 1.3 million barrels in the week that ended Feb 1 to 447.21 million barrels, data from the Energy Information Administration (EIA) showed on Wednesday.

Meanwhile, average weekly US crude oil production remained at the record 11.9 million barrels per day (bpd) it reached in late 2018. The United States is currently the world’s largest oil producer, ahead of traditional top suppliers Russia and Saudi Arabia.

Countering the rising US crude output and inventories are voluntary supply cuts led by the Organization of the Petroleum Exporting Countries (OPEC) aimed at tightening the market and propping up prices.

Meanwhile, US sanctions against Venezuela’s oil industry are expected to freeze the sales proceeds of 500,000 bpd of crude exports.

“The cumulative effect of OPEC-led output cuts along with additional US sanctions on Venezuela’s state oil company ... bolstered market sentiment,” said Benjamin Lu of Singapore-based brokerage Phillip Futures in a note on Thursday.

French Bank BNP Paribas cut its estimated average of 2019 prices for Brent to USD 68 per barrel and for WTI to USD 61 per barrel, both down by USD 8 from its previous outlook.

“We expect the oil price to rise in the first-half of 2019 on tightening supply conditions and decline in the second-half on weakening economic activity and an increase in US crude exports to international markets,” said French bank BNP Paribas.