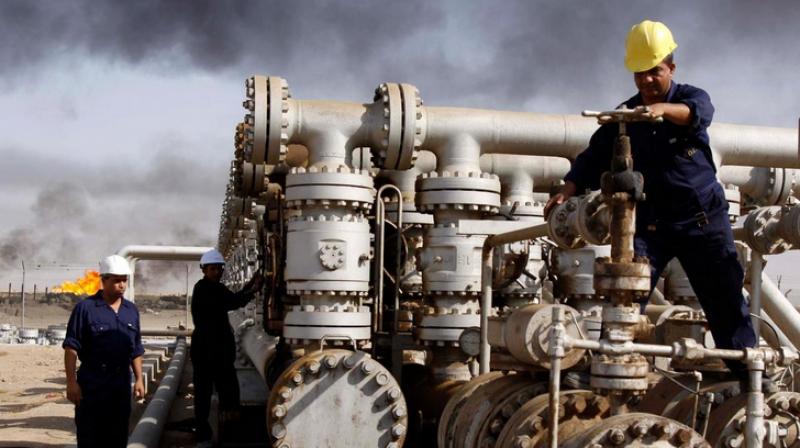 Oil prices slipped back Wednesday after two days of gains, although Brent crude remained above $30 a barrel. (AFP Photo)

SINGAPORE: Oil prices slipped back Wednesday after two days of gains, although Brent crude remained above $30 a barrel, as renewed US-China tensions offset optimism about the easing of coronavirus lockdowns.

Brent, the international benchmark, fell 1.1 percent to $30.63 a barrel in early Asian trade. On Tuesday, the contract surged 14 percent and rose above $30 for the first time since mid-April.

US marker West Texas Intermediate slipped 1.9 percent and was changing hands for $24.13 a barrel.

Oil markets have been battered as the virus strangled demand due to business closures and travel restrictions, with US crude falling into negative territory last month for the first time.

They started rallying strongly this week as countries from Europe to Asia ease curbs and economies start shuddering back to life.

But gains were capped Wednesday as dealers follow a brewing US-China row after Donald Trump hit out at Beijing over its handling of the outbreak, saying it began in a Wuhan lab, but so far offering no evidence.

"And the one that would hurt the most would be for China to reduce imports of US oil."

This week's rally was in part driven by a deal agreed between top producers to reduce output by almost 10 million barrels a day, which came into effect on May 1.

There have also been signs that the massive oversupply in the market is starting to ease as demand slowly comes back.

Energy data provider Genscape said earlier this week that stockpiles at the main US oil depot in Cushing, Oklahoma had increased by only 1.8 million barrels last week following weeks of major rises.