Normal rains in most regions, only rice hurt

Despite normal monsoon, sowing for rice and all key cereals has been low this year, compared to the same period the previous year. 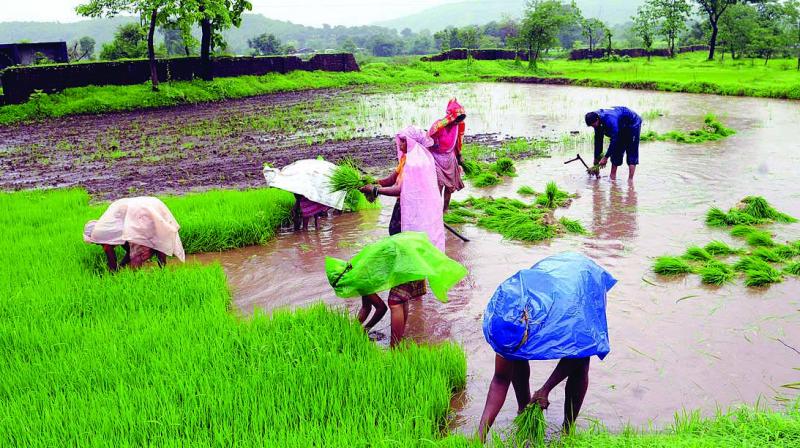 PUNE: For the first three months in this monsoon season, most regions across the country have received normal or above normal rainfall, which could facilitate near normal agricultural output.

With less than a month left in the four-month June-September season, only parts of East India and North India have recorded deficient rainfall.

The latest India Meteorological Department data showed that from June 1 till now, country as a whole received normal rains at 702.3 mm. Only East-India, Northeast India and Northwest India have received 18 per cent and 5 per cent deficit rains respectively.

Reservoir levels in the country have also recorded a significant jump over a year ago which bodes well for the sowing and production of Rabi or winter crops.

Monsoon rains are the lifeblood of $2.6 trillion economy, spurring farm output and boosting rural spending to buy goods from phones, refrigerators to automobiles and tractors.

Despite normal monsoon, sowing for rice and all key cereals has been low this year, compared to the same period the previous year. "The sowing patterns across key crops as of August 23 has seen an improvement but the concern remains around the sowing of rice which has seen a contraction of around 20 lakh hectares from normal and a year ago," a Care Ratings report said on Friday.

On Friday, Agricultural Ministry report said sowing of the major crop rice was down by 17.57 per cent at 354.84 lakh hectares, down from 372.42 lakh hectares last year.

Excess rainfall in some regions is a positive from the view of reservoir and groundwater level but could destroy the production of certain crops, Care Ratings said.

It said combination of excess rainfall and deficient rainfall in almost 40 per cent of all the subdivisions could weigh on food inflation going ahead.

The sowing patterns position of all-crops have been below the normal and compared with the previous year primarily on account lower sowing recorded in rice.

This could be partly attributed to the deficient rainfall in West Bengal and Uttar Pradesh, which are the large producers of rice.

"Between June to August monsoon this year has been normal," Madan Sabnavis, Chief Economist at Care Ratings, said on Friday in Monsoon Monitor report.

However, there has been a marginal moderation in the deviation from the normal for this cumulative period compared with a week ago, he said.