The subsidy payment through special banking arrangement attracts interest liability for the government. 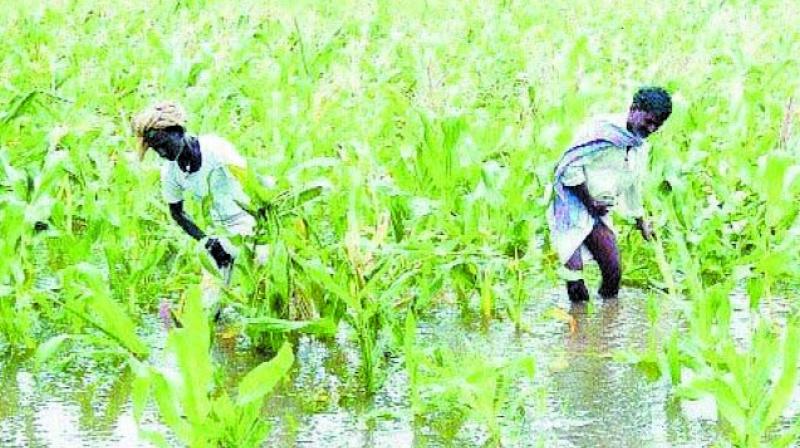 New Delhi: The finance ministry may withhold Rs 23,000 crore of fertilisers subsidy payable in the last quarter of this fiscal to rein in the fiscal deficit at 3.3 per cent.

These payments would, in all probability, be released in the first quarter of next fiscal, official sources told Financial Chronicle.

Fertiliser companies will get Rs 23,283 crore paid through a special banking arrangement following a clearance from the finance ministry and the nodal department of fertilisers.

Unpaid subsidy bills will, however, not reflect as a liability, given that the payments would be done through state-run banks.

This arrangement will create enough space for finance minister Goyal to go ahead with the package for farmers given that Lok Sabha elections are round the corner in three months.

A comprehensive farm package has become inevitable for the NDA government, especially after Congress president Rahul Gandhi announced his party’s intention to introduce a minimum income guarantee scheme if elected to power.

The subsidy payment through special banking arrangement attracts interest liability for the government. For the companies, delayed payments would only add to their working capital costs and liquidity issues.

Special banking arrangement is already in place for the last few years, with state-run banks roped in to channelise the payments.

Banks get paid via the fertilisers department when the latter is allowed to draw funds from next financial year's budgetary allocation or through supplementary demands for grants in June 2019. This year's supplementary demand for grants did not approve this extra fertiliser subsidy.
The government had budgeted Rs 73,500 crore towards fertiliser subsidies for this fiscal ending March 31. About half of this allocation went against pending subsidy bills from previous year.

Fertiliser companies have not been a happy lot with this arrangement given the staggered and delayed payments, spurt in fertiliser prices overseas and depreciation in the rupee.

Owing to a combination of these factors, imported fertilisers have had become expensive, thereby bulging the subsidy bill beyond Rs 1 lakh crore. The government has released payments worth Rs 60,383.79 crore till December this fiscal but a large chunk of this amount has been against pending bills of last fiscal.

Since the finance ministry delayed approvals for additional subsidy outgo, the fertilisers department had leaned heavily on the “special banking arrangement” for making payments to domestic private and state-run fertiliser companies like Coromandel International, Chambal Fertilisers and Chemicals, Gujarat Narmada Valley Fertilisers & Chemicals and Rashtriya Chemicals and Fertilizers. These companies sell fertilisers to farmers at discounted rates and the government compensates them.

The Comptroller and Auditor General has pulled up the government for increasingly resorting to "off-budget financing," such as asking banks to fund subsidy.