Passenger ticket revenues were Rs 585 crore, down 93 per cent and ancillary revenues slipped 81 per cent to Rs 169 crore 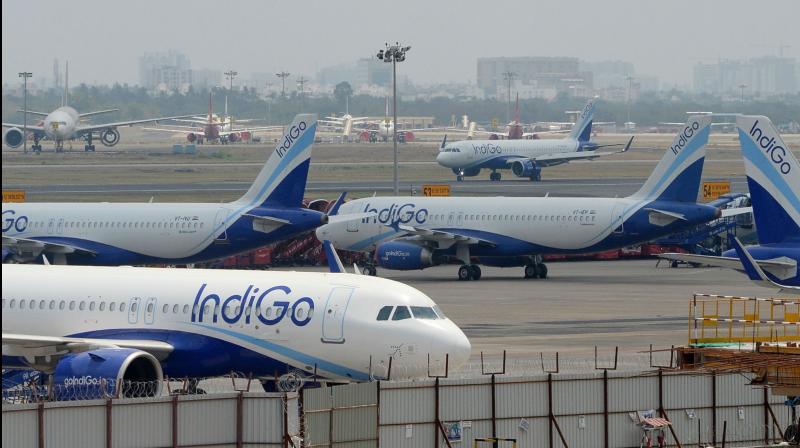 New Delhi: InterGlobe Aviation on Wednesday reported a net loss of Rs 2,844.3 crore for the three months ended June due to disruptions caused by the coronavirus pandemic, and the airline has pitched for removal of cap on fares.

The parent of the country's largest airline IndiGo had a net profit of Rs 1,203.1 crore in the year-ago period.

In the first quarter of the current financial year, the airline's total income declined 88 per cent to Rs 1,143.8 crore. In the year-ago period, the same stood at Rs 9,786.9 crore, IndiGo said in a release.

Revenue from operations declined 91.9 per cent to Rs 766.7 crore in the quarter under review compared to the same period a year ago.

"Closure of scheduled operations till May 24, 2020 and lower capacity deployment thereafter on account of COVID-19, significantly impacted the quarterly results," the airline said.

IndiGo CEO Ronojoy Dutta said, "The aviation industry is going through a crisis of survival and therefore, our cash balance remains our number one priority".

"However, we also recognise that major disruptions offer companies opportunities for improvement in product, customer preference, costs and employee engagement," he noted.

In the wake of the pandemic, air services were suspended in late March. Domestic flights resumed on May 25 while international flights services remain suspended.

"We would like the fares cap to be removed as quickly as possible. Markets are very dynamic, it is directional, seasonal.

"It is impossible for anyone to predict and decide what should be the right level of fares. So, we would like to see this removed quickly," Dutta said during a post-earnings call.

The government has put in place caps on ticket prices since domestic flights resumed. The caps would remain in place till November 24.

"We think we can do a better job in managing the revenue without fare caps. And that would work to the advantage of the customers (also)," Dutta said.

He noted that pricing is a question of capacity and that airlines should be allowed to keep changing fares along with the demand.

"Let us not have dictate (them) by someone by saying what the fare should be," he stressed.

The IndiGo chief said he remains highly bullish on the long term view though things in the near-term, say next 10 months, were obviously going to be tough.

"Going further, 18 months out, we are very bullish. We will be losing customers at the top end because of the corporate travel going down but we expect to gain from the bottom end," he said.

Leasing and payroll expenses account for a major chunk of fixed costs.

"We are managing our leasing cost with a long-term perspective and honouring all our commitments. We of course have no choice but to reduce our payroll cost given the current situation. We are going with this exercise in a very thoughtful and prudent manner.

"We are clearly in an unchartered territory. However, we also recognise that industry is going through a very disruptive face, which presents a unique opportunity to strengthen our airline," Dutta said.

In addition to earlier announced measures that are expected to provide IndiGo Rs 3,000 to 4,000 crore liquidity. Pande said, "We are working on sale and leaseback of our encumbered asset, which are in the advance stages of discussion".

Also, an additional Rs 2,000 crore is to be raised by way of putting owned-aircraft asset on sale and lease back, he said.

At the end of June, IndiGo had 274 aircraft in its fleet.

The company is aiming to deploy around 60-70 per cent capacity in the third quarter, subject to government lifting restrictions, Dutta said.

Dutta said the airline is continuously in discussion with its OEMs (Original Equipment Manufacturers) amid a tough climate.

"We look at a full long-term horizon. We are in a very close relationship with our lessors, with Airbus. So, we are having negotiations but it is not transaction-based but relationship-based," he added.

He also said that at this stage IndiGo was not interested in Air India.