'Tomato prices likely to decline in next 15 days' 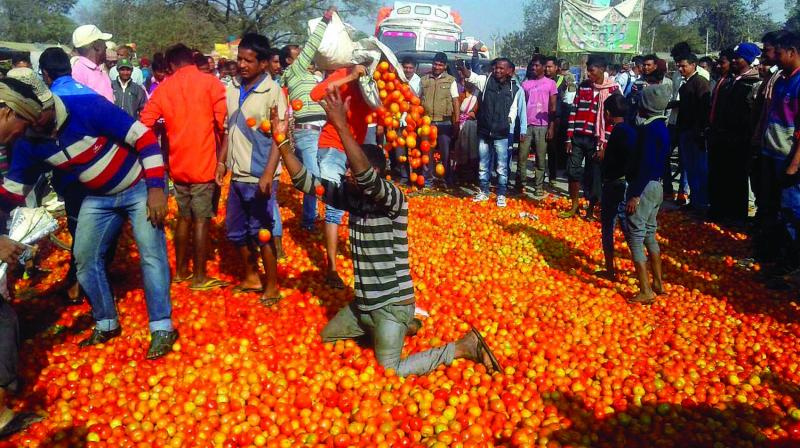 New Delhi: Tomato prices, which have sky rocketed up to Rs 100 per kg, are more likely to decline over the next fortnight as supplies from southern and other growing states are expected to improve, said a senior ICAR official.

Retail tomato prices have gone through the roof for more than a month now in most parts of the country and are still ruling high up to 100 per kg, as per the data maintained by the consumer affairs ministry.

The rates in producing centres have also gone up sharply. For instance, tomato is being sold at Rs 83/kg in Shimla and Rs 75/kg in Bengaluru. The prices vary depending on the variety and quality. In the year-ago period too, tomato rates had gone up to Rs 65/kg but it had not hit this high.

"As per personal assessment, I expect prices to come down in the next 15 days. Supplies from southern states and other growing areas are likely to improve," Indian Council of Agricultural Research (ICAR) Deputy Director General (Horticultural Science) A K Singh told PTI.

As rains recede, the supplies from southern states like Andhra Pradesh, Telangana and even Maharashtra will improve, that will ease pressure on prices, he said. Singh said that heavy rains in Madhya Pradesh and Rajashtan and other growing states have caused some damage to the crop.

Even the crop that is harvested has not been able to reach market on time due to transportation woes. That apart, the cost of transporting the produce to the main mandis has gone up as trucks are taking more than the normal time due to rains and floods, he added.

The Delhi-based Tomato Merchant Association (of Azadpur mandi) Ashok Kaushik said transportation cost has gone up due to more time involved in getting the produce in rainy season. However, the supplies are expected to improve in next 2 weeks.

"We have talked to traders in Karnataka, Andhra and Maharashtra. Harvesting is in progress and we hope rains to recede and trucks reach on time," he said.

The supplies have been hit badly in the national capital as the crop in neighbouring states has been damaged due to heavy rains followed by heat. The supplies from Haryana have stopped as the harvesting in the state has been completed early and the current arrival in the market is from Shimla, Himachal Pradesh, he said.

While the government has pegged the country's total tomato output to be higher by 15 per cent to 187 lakh tonnes in the 2016-17 crop year (July- June), but it is more likely that the output figures could be revised after assessing the current damage.