Business   In Other News  28 May 2018  Holistic strategy to find a long-term solution to fuel prices: Pradhan
Business, In Other News 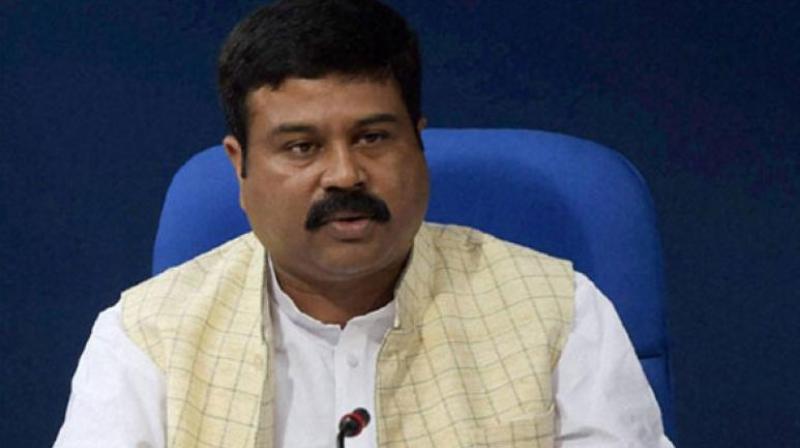 Bhubaneswar: The government is planning a "holistic strategy" to find "long-term solution" to spike in petrol and diesel prices triggered by a spurt in international rates, Oil Minister Dharmendra Pradhan said on Monday.

He did not share any details of the strategy. Petrol and diesel prices were today hiked for the 15th day in a row, taking the cumulative increase this month to the highest in at least five years.

Petrol price has been hiked by Rs 3.64 a litre and diesel by Rs 3.24 in Delhi since state-owned oil firms ended a 19-day pre-Karnataka poll hiatus to resume daily price revision on May 14. The prices are at an all-time high.

"I have already categorically stated (on) this issue several times. The present oil price hike is due to three main factors. Hike in the international price of crude, fluctuation in the dollar and Indian currency ratio, and some of the tax issues are also there," he told reporters here.

Petrol in Delhi costs Rs 78.27 a litre and diesel is priced at Rs 69.17. Delhi has the lowest fuel price among all metros and most state capital due to lower incidence of local sales tax or VAT.

"For a long-term solution, Government of India is planning for a holistic strategy... bringing petroleum products within the ambit of GST is one among them," he said.

"We are sensitive let's see how things are unfolding".

Pradhan was replying to questions on when consumers can expect relief from rising fuel prices. He, however, did not elaborate on the solution or the holistic strategy. He also refused to say if the government is planning a cut in excise duty to provide relief to consumers.

The government had raised excise duty on petrol by Rs 11.77 a lire and that on diesel by 13.47 a litre in nine instalments between November 2014 and January 2016 to shore up finances as global oil prices fell, but then cut the tax just once in October last year by Rs 2 a litre.

The government had in June last year junked a 15-year old practice of revising rates every fortnight and introduced daily revisions which worked well except periods immediately preceding an election.

There was a 19-day freeze in revising rates before Karnataka went to polls, and since the time the hiatus ended on May 14, rates have gone up by on every single day - petrol price was today raised by 15 paisa a litre and diesel by 12 paisa, according to a price notification issued by oil marketing companies.

Last week, after a weekly meeting of the Union Cabinet Law Minister Ravi Shankar Prasad had stated that the government is working on a long-term solution to address the volatility and frequent revisions in rates.

"The government is keen that instead of having an ad hoc measure, it may be desirable to have a long-term view which addresses not only the volatility but also takes care of the unnecessary ambiguity arising out of frequent ups and downs. That process is underway," he had said.

State-owned Indian Oil Corp (IOC), Bharat Petroleum Corp Ltd (BPCL) and Hindustan Petroleum Corp Ltd (HPCL) were in April 2002 given freedom to revise rates of petrol and diesel on 1st and 16th of every month based on average rate of benchmark international petroleum product prices and rupee-US dollar rates in the preceding fortnight.

The revisions continued till just before the general elections in 2004 when oil companies went slow and after a Congress-led UPA came to power the entire process was reviewed as the international oil prices started moving up.

Rates at refinery gate were revised on fortnightly basis but not all of the desired hike was passed on to the consumers and that increase not passed on converted into a subsidy.

The UPA government finally freed petrol price in June 2010 and the diesel rates were decontrolled by the current BJP government in November 2014.

The central government levies Rs 19.48 excise duty on a litre of petrol and Rs 15.33 on diesel. State sales tax or VAT varies from state to state.

Unlike excise duty, VAT is ad valorem and results in higher revenues for the state when rates move up. In Delhi, VAT on petrol was Rs 15.84 a litre, and Rs 9.68 on diesel in April.