Business   In Other News  24 Apr 2020  International passenger capacity for India reduced by 89 pc in April: UN
Business, In Other News 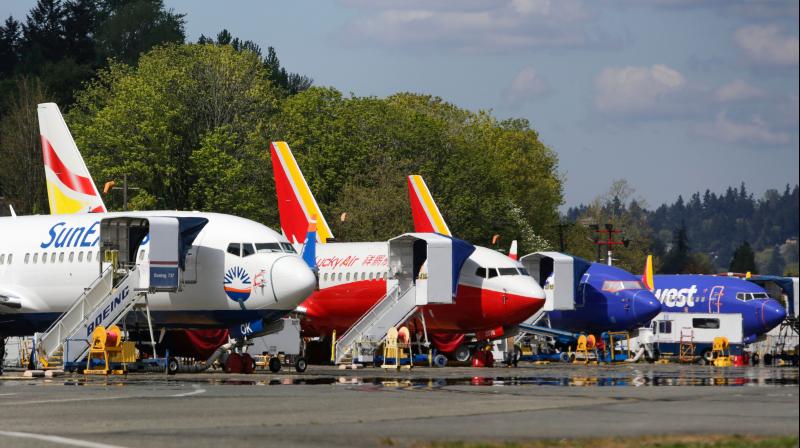 Boeing 737 MAX 9 airliners are pictured on the flight line at the Boeing Renton Factory in Renton, Washginton on April 20, 2020. - Boeing announced it will resume commercial airplane production this week at its Puget Sound-region facilities. AFP photo

United Nations: International passenger capacity for India plunged by a whopping 89 per cent so far in April due to the COVID-19 pandemic as compared to a "business-as-usual" scenario, according to the latest projections from the International Civil Aviation Organisation.

The Montreal-based ICAO, the specialised agency of the United Nations, said that by September, the world could have 1.2 billion fewer international air travellers, compared to regular originally planned or business-as-usual.

Estimates by the organisation show a dramatic reduction in international passenger capacity for countries across the world between January and April, as the COVID-19 pandemic spread globally.

By March, global international passenger capacity reduced by 49 per cent, with significant reduction not only in States experiencing an early outbreak but also worldwide.

For India, the international passenger capacity has reduced by 89 per cent so far in April or a negative 6,263,030 capacity change from originally planned or in a business as usual scenario.

In January, there was zero reduction for India in international passenger capacity as the pandemic was in its nascent stages across most of the world, except China, and air travel was still not significantly impacted.

The passenger capacity reduction was about 2 per cent for India in February.

However by March, when the World Health Organisation had declared COVID-19 a global pandemic and infection rates were soaring across the world, India witnessed a 29 per cent capacity reduction, with capacity falling 2,077,578 as compared to originally-planned.

ICAO estimates also show that international capacity globally could drop by as much as two-thirds from what had been forecast for the first three quarters this year, leading airline revenues to drop by as much 160 to 253 billion dollars for the January to September period.

It said Europe and the Asia-Pacific will be hardest hit by the capacity and revenue impacts, followed by North America.

Similarly, the most substantial reduction in passenger numbers is expected to be in Europe, especially during its peak summer travel season, followed by the Asia-Pacific.

The agency said that prior to the outbreak, airlines had planned to increase seat capacity by 4.2 per cent for the first 9 months of 2020, compared to the same period of 2019.

According to the latest estimates, passenger seat capacity could instead drop anywhere between 41 per cent to 67 per cent.

Given the originally planned seat capacity, passenger demand could have increased 64 million for the first 9 months of 2020, compared to the same period of 2019.

However, passenger demand could now drop by 705 million-1,177 million depending on whether the first sign of recovery appears in late May or in the third quarter of the year and later.

With the originally planned seat capacity and trend line growth of demand, airlines' gross passenger operating revenues could have increased USD 15 billion for the first 9 months of 2020, compared to the same period of 2019.

However, according to the latest estimates, airlines' revenues could instead plummet USD 160 to 218 billion if the first sign of recovery comes in late May and USD 218 to 253 billion if recovery restarts in the third quarter.

Over two third of revenue loss would be recorded by Asia/Pacific and Europe.