Business   In Other News  23 Sep 2018  Modi faces calls for resignation over Rafale jet deal
Business, In Other News

Opposition has questioned the govt on the choice of Anil Ambani’s Reliance Defence as Dassault’s local partner. 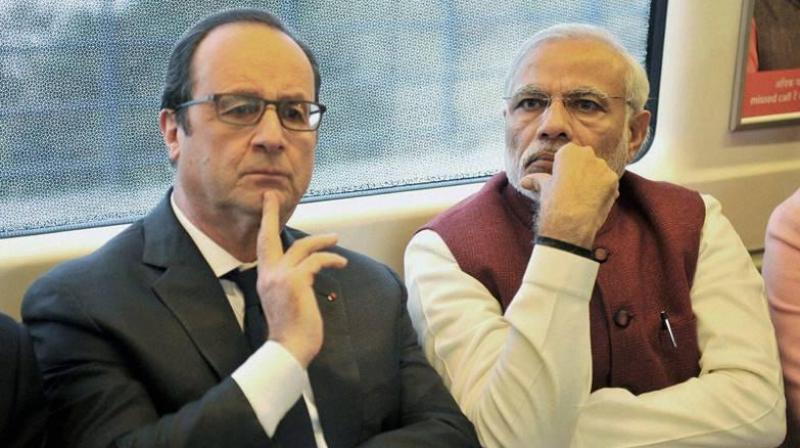 Prime Minister Narendra Modi faced calls for his resignation over allegations of corruption in a military jet deal with France after former French president Francois Hollande was quoted as saying New Delhi had influenced the choice of a local partner. (Photo: PTI)

New Delhi: Prime Minister Narendra Modi faced calls for his resignation over allegations of corruption in a military jet deal with France after former French president Francois Hollande was quoted as saying New Delhi had influenced the choice of a local partner.

Indian political parties have been gunning for Modi over the 2016 purchase of 36 Rafale planes from Dassault Aviation estimated to be worth $8.7 billion, saying he had overpaid for the planes and had not been transparent.

In recent months, the opposition has questioned the government on the choice of billionaire businessman Anil Ambani’s Reliance Defence as Dassault’s local partner instead of a state-run manufacturer with decades of experience.

On Friday, Hollande, who cleared the intergovernmental deal when he was in office, was quoted as saying New Delhi had put pressure on Dassault to choose Reliance.

“We had no choice. We took the interlocutor that was given to us,” he was reported as telling the French news service Mediapart, fuelling a political storm in India.

Under Indian defence procurement rules, a foreign firm must invest at least 30 percent of the contract in India to help it build up its manufacturing base and wean off imports.

For that, the French firm picked Reliance and not Hindustan Aeronautics Limited, the state-run giant that has been producing planes for decades, most of them Russian under licence.

“The PM personally negotiated and changed the Rafale deal behind closed doors. Thanks to François Hollande, we now know he personally delivered a deal worth billions of dollars to ...Anil Ambani,” Rahul Gandhi, the president of the main opposition Congress party, said in a tweet. “The PM has betrayed India.”

Modi, who stormed to power in 2014 promising to rid India of deep-seated corruption, had no “moral right” to remain in power after the revelations from Hollande, senior Congress leader Anand Sharma said.

Smaller parties also joined the attack on Modi who is already under pressure to shore up his political base ahead of a series of state elections this year followed by a national election in 2019.

Modi’s office did not respond to a request for comment. The defence ministry said in a tweet that neither the French nor Indian government had had a say in the matter.

“The report referring to fmr French president Mr. Hollande’s statement that GoI (government of India) insisted upon a particular firm as offset partner for the Dassault Aviation in Rafale is being verified.

“It is reiterated that neither GoI nor French Govt had any say in the commercial decision.”

Reliance did not immediately respond to a request for comment. Dassault denied the report, saying it had picked Reliance as a partner for industrial reasons.

“This is Dassault Aviation’s choice, as (Dassault) CEO Eric Trappier explained in an interview published in MINT newspaper on April 17,” the company, which also makes Falcon business planes, said in a statement.

“Dassault Aviation and Reliance have built a plant in Nagpur for manufacturing parts for Falcon and Rafale aircraft. The Nagpur site was chosen because of the availability of land with direct access to an airport runway, an essential condition (for) aeronautic activities.”

The French foreign ministry published a statement saying French authorities were not involved in the choice of Indian industrial partners in the Rafale deal.

“The French government is in no way involved in the choice of the Indian industrial partners which have been, are or will be, chosen by French companies,” the statement said.

“In accordance with the Indian procedure, French companies have full freedom to choose the Indian industrial partners they consider to be most pertinent and then to propose to the Indian government for approval the offset projects they want to carry out in India with local partners to respect their obligations,” it added.

The deal with Dassault was expected to deepen strategic ties with France and the company itself has hoped it would lead to a larger order for combat jets that the Indian air force says it needs to face a perceived twin threat from China and Pakistan.