Consumers in tier-III cities were 1.4 times more inclined towards spending on apparel than tier-I cities, it said 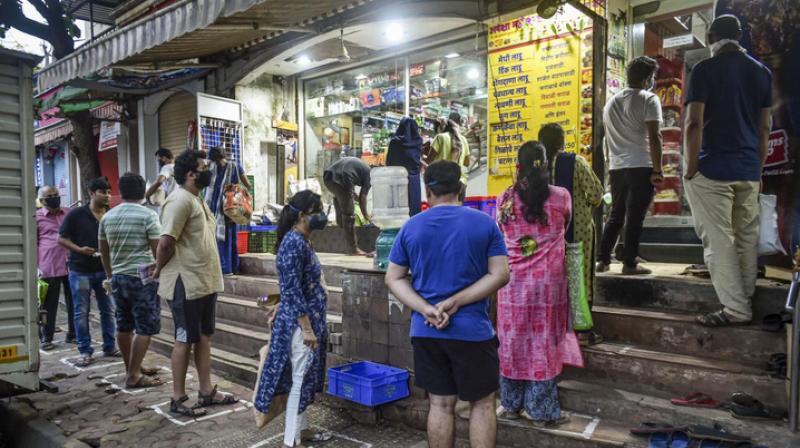 Indian consumers are cautious about spending in the wake of the coronavirus pandemic. (PTI Photo)

New Delhi: Consumers in India are cautious about spending in the wake of the coronavirus pandemic with 78 per cent of respondents claiming to reduce discretionary spending, according to a survey by consultancy firm KPMG.

However, consumers in tier-II and tier-III cities were almost two-times more optimistic on their spending habits than those in tier-I, hence it could be the next focus area to monitor spending habits, as per KPMG in India's report titled 'Time to open my wallet or not? - The new spending patterns emerging from a consumer's perspective'.

Interestingly, the survey said "overall 51 per cent of respondents feel that the impact of COVID-19 will be short-lived and normalcy is not far".

Commenting on the findings, KPMG India Partner and Head  Consumer Markets and Internet Business Harsha Razdan said, "our study indicates that 22 per cent consumers in tier-II and 30 per cent consumers in tier-III feel that their spending will either increase or remain the same as prior to COVID-19 and this could be the next focus area for retailers to expand their presence."

"In the next three months, 49 per cent respondents intend to spend up to Rs 5,000, across categories which makes this the most popular basket value and indicates that consumers are cautious about spending," he added.

Elaborating on consumer spending habits, the KPMG India survey said,"78 per cent of the respondents claim to reduce on discretionary spending...tier-II and -III cities are 1.9x more positive than the tier-I cities."

Consumers in tier-III cities were 1.4 times more inclined towards spending on apparel than those in tier-I cities for spending more than Rs 5,000, it said.

Across all categories, males intend to splurge more than females in the spending range of over Rs 5,000 with 60 per cent of males intending to shell out up to Rs 5,000 in skin care and cosmetics, it added.

In terms of consumer age band, the survey said, "the 20-30 age band is more optimistic on discretionary spending, while spending habits reduced considerably among both male (76 per cent) and female (82 per cent) consumers."

KPMG said the survey has been conducted with 2,376 respondents, of which 66 per cent were male and 34 per cent female. It was conducted across tier-I, tier-II, and tier-III cities, among different types of spenders and age groups, between May 18, 2020 to June 7, 2020.