India's match against New Zealand was washed out. 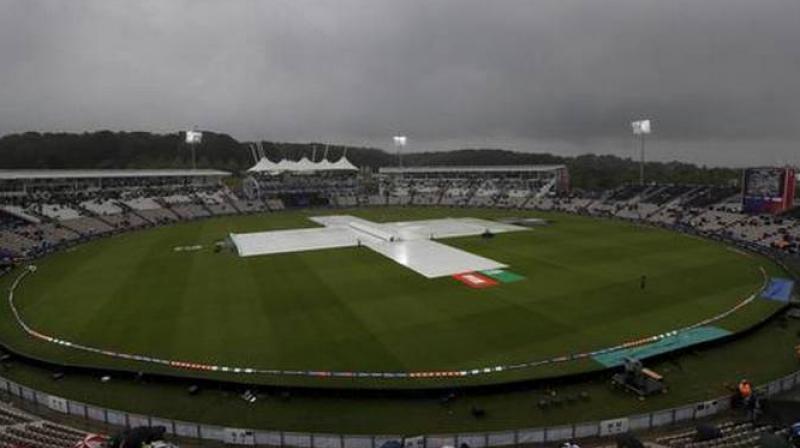 Team India has four more games to play before the semi-finals and insurers are hoping there are no wash-outs because of their liability surfaces when a match is called off or disrupted due to rains. (Photo: File | AP)

New Delhi: Not only fans, even insurance companies are praying to rain God to spare India's remaining matches at the ongoing cricket World Cup as washed-out games could cost them Rs 100 crore in pay-outs.

Team India has four more games to play before the semi-finals and insurers are hoping there are no wash-outs because of their liability surfaces when a match is called off or disrupted due to rains. India's match against New Zealand was washed out.

Indian insurers are sitting on a risk of about Rs 100 crore, as rains threat still loom large over remaining matches. So far, as many as four matches have been abandoned in this edition of ICC World Cup.

According to sources, the Indian market's capacity in terms of the total sum assured is around Rs 150 crore and the risk is shared by several insurers. Biggies like New India Assurance, General Insurance Corporation, ICICI Lombard General Insurance and Oriental Insurance are the underwriters who typically participate in these covers.

The claims are meant for losses incurred to broadcasters who pay in advance to ICC for broadcast rights.

There is no liability if matches take place, sources said, adding that wash-out or disruption in the play due to rains leads to shortage in advertisement revenue for broadcasters.

Advertisement revenue varies based on the opponent, and the risk and coverage also differ accordingly.

Insurance coverage was to the tune of about Rs 50 crore for high voltage India-Pakistan match which was won by the Virat Kohli-led Indian team.

According to insurance industry sources, the sum insured on the advertisement revenue front could range from Rs 5 crore to Rs 50 crore per match. But for special matches like finals or semi-finals, the amount goes up to Rs 70-80 crore, they said.

"If one match gets washed out due to rain, it would result in huge liability for underwriters. So the risk at stake for remaining matches for insurers are quite high," Datta said without quoting a number.

Indian insurers are providing cover limited to advertisement revenue and the shortfall in the revenue is covered by the underwriter in case of disruption due to rain.

International Cricket Council (ICC) has sold global broadcasting rights for two World Cups and two Champions Trophy matches and the T-20 World Cup for an eight-year period to Star India. Star India has agreed to pay USD 1.98 billion, which was 80 per cent more than the USD 1.1 billion it paid for the previous eight-year cycle.

Since Star has already committed to the payout, it stands to lose if the matches do not take place.

Star India likely took out contingency insurance from Indian insurers, but reinsurance may have been provided by the specialist Lloyd's of London market, sources said.

According to reports, the England and Wales Cricket Board (ECB), which gets the revenue from the ticket sales has an insurance policy against matches being called off.

Cricket fans get all their money back if no ball is bowled, or if the game is abandoned after a small amount of play.