Business   In Other News  22 Nov 2018  PM Modi lays foundation stone for city gas work in 122 districts
Business, In Other News

PNGRB had offered 106 GAs in the previous eight bid rounds, of which 56 were awarded. 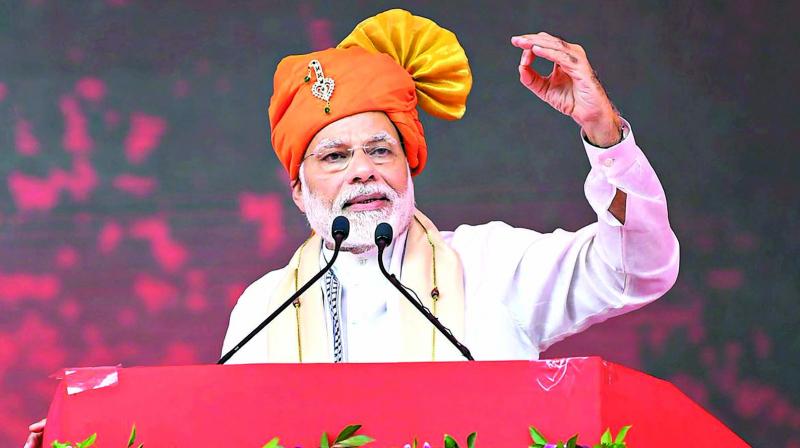 New Delhi: Prime Minister Narendra Modi on Thursday laid foundation stones to mark the beginning of work for CNG supply to automobiles and piped cooking gas to kitchens in 129 districts of 18 states, covering over a quarter of India's population.

Keen to cut emissions through a greater share of environment friendly natural gas as auto and cooking fuel, Modi also launched the 10th round of bidding for award of city gas licenses in 124 new districts, which have been clubbed into 50 Geographical Areas (GAs).

"This is an important step in developing infrastructure," he said, adding once 10th round is completed, natural gas as fuel will cover 400 districts and 70 per cent population. Modi said households with piped cooking gas connections would reach 2 crore after network in cities awarded up to 10th round is completed. Currently there are over 32 lakh piped consumers. He said CNG stations too would more than double to 10,000.

Downstream regulator Petroleum and Natural Gas Regulatory Board (PNGRB) had just a few weeks back awarded licenses for 78 out of the 86 Gas put on offer in the 9th round of bidding. Of the GAs awarded in the 9th round, Modi laid foundation stones for work in 65 GAs, made up of 129 districts, while leaving out the ones in election-bound states like Rajasthan, Madhya Pradesh and Telangana due to the model code of conduct.

The license winners of 61 GAS out of these 65 GAS organised functions in their respective areas, which were connected to Vigyan Bhawan in the national capital through video conferencing, where the prime minister formally launched the city gas works. With an annual consumption of 142 million standard cubic meters per day, the share of natural gas in India's energy mix is just 6.2 per cent.

This compares to a world average of 24 per cent. Gas accounts for 25 per cent share in Gujarat's energy mix. Speaking on the occasion, Oil Minister Dharmendra Pradhan said the city gas licensing rounds are a step towards making India a gas-based economy.

Gas is an environment-friendly fuel which is cheaper than not just liquid fuels such as petrol and diesel but is also cheaper than subsidised LPG. City gas distribution (CGD) networks entail building pipelines from the gas supply source to the doorstep of consumers as well as setting up CNG dispensing stations to supply the fuel to automobiles.

PNGRB had offered 106 GAs in the previous eight bid rounds, of which 56 were awarded. 35 GAs were authorised by the government prior to incorporation of PNGRB.

The 91 GAs existing prior to the 9th round covered 11 per cent of the country's area and about 19 per cent of the population. Over 3.2 million vehicles are served in these GAs by 1,349 CNG stations as compared to over 63,000 petrol pumps. As many as 4.6 million households are connected with piped cooking gas.

"Of the 86 GAs of 9th bid round, five GAs have been excluded as they are under litigation. Another 16 GAs fall in Rajasthan, Madhya Pradesh and Telangana where assembly elections are on and so have been excluded because of model code of conduct," he said. First CNG station or a piped natural gas connection in the GAs awarded in the previous round will take at least 1-2 years to become operational.

"In the two rounds (9th and 10th), we have covered 50 per cent of India's population and 42 per cent of the area," he said. Bids for the 10th round will close on February 5 and areas will be awarded by the end of February, he said.

Cities on offer in the 10th round include Nellore in Andhra Pradesh, Muzaffarpur in Bihar, Kaithal in Haryana, Mysore and Gulbarga in Karnataka, Allapuza and Kollam in Kerala, Ujjain, Gwalior and Morena in Madhya Pradesh, Jhansi and Basti in Uttar Pradesh, Firozpur and Hoshiarpur in Punjab, Ajmer and Jalor in Rajasthan, Nainital in Uttarakhand and Darjeeling and Howrah in West Bengal.