To promote tourism, now 28 per cent tax will be applicable only when the hotel bill is Rs 7,500 or above. 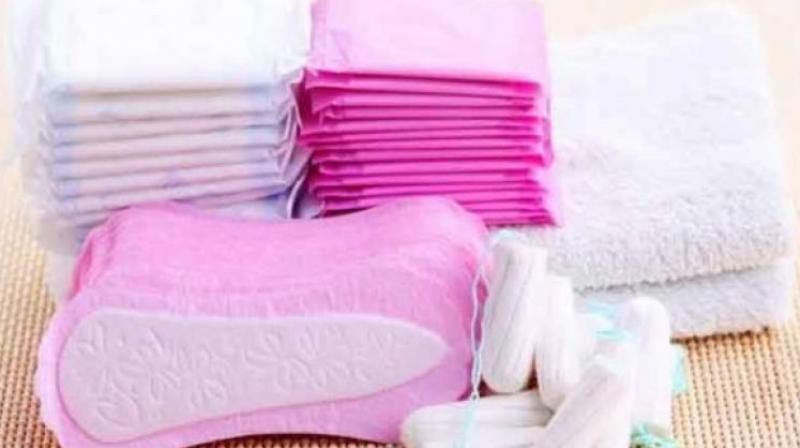 Sanitary napkins were taxed 12 per cent under the one-year old GST regime, which attracted a lot of criticism from various quarters.

New Delhi: In one of the biggest moves to woo women voters and the middle class before the 2019 Lok Sabha elections, the GST Council on Saturday exempted several items of daily use from tax, and slashed rates on a series of consumer products and household appliances. It also cut tax rates to give relief to traders and boost tourism.

The council decided to completely remove from GST sanitary pads, rakhis (without gold or precious stones), fortified milk, raw material for brooms and idols of deities made of stone, marble and wood.  Sanitary napkins were taxed 12 per cent under the one-year old GST regime, which attracted a lot of criticism from various quarters.

GST was also reduce to 18 per cent from 28 per cent on scent sprays and similar toilet sprays, powder-puffs and pads for the application of cosmetics or toilet preparations.

The revised tax rates will come into effect from July 27. GST on footwear between Rs 500 to Rs 1,000 was reduced from 18 per cent to 5 per cent. Currently footwear costing up to Rs 500 is taxed at 5 per cent.

The council decided to bring down GST from 18 per cent to 12 per cent on handicraft items like handbags (including pouches and purses), jewellery boxes, wooden frames for painting, photographs, mirrors, hand-crafted lamps, art ware of glass, iron, brass, copper and aluminium, among many others.

For some handicraft items, the tax rate was reduced from 12 per cent to 5 per cent. These include handmade carpets and other handmade textile floor coverings (including namda/gabba), handmade lace, hand-woven tapestries, hand-made braids and ornamental trimmings.

Finance minister Piyush Goyal said that the decisions taken by the council on Saturday will touch 25 crore people and will help in job creation.

“Every state wanted that the rates on these items be lowered so that the middle income households are benefited... It has also been decided that the GST Council will rise above revenue consideration and focus more on job creation and economic growth,” he said.

To promote digital education, tax on supply of e-books has been reduced to 5 per cent from 18 per cent.

The GST Council’s move to reduce items used by middle class comes at a time when there were complaints that the tax burden on salaried people has risen during the BJP-led NDA rule. Government hopes that with this reduction it will be able to win the support of this crucial segment before general elections next year. The tax rate reduction is likely to cost around Rs 8,000-10,000 crore annually to the exchequer, sources said.

It was decided to exempt from GST supply of services by an old age home run by state/Central government or by a body registered under 12AA of Income Tax Act to its residents (aged 60 years or more) against consideration up to Rs 25,000 per month per member provided consideration is inclusive of charges for boarding, lodging and maintenance.

In a move to help traders, it was decided that reverse charge mechanism will be postponed for one year. The council approved the proposal that small traders with a turnover of upto Rs 5 crore will now need to file returns quarterly. However, they will have to pay tax on a monthly basis. Mr Goyal said that this will benefit 93 per cent of the tax payers.

The GST Council allowed multiple GST registration in a state as demanded by some companies due to operational reasons. With truckers complaining that heavy fine was levied on them for small errors in e-way bill, it was decided that a standard operation procedure will be created. Under this there will be a small fine for small mistakes to avoid harassment of the transporters.

A chance will be given till August 31 for businesses to migrate to the GST regime and late fee would be waived.

The council also cleared over 40 amendments to the GST law, including increasing threshold for composition scheme to Rs 1.5 crore and allowing multiple registration for businesses.

The next meeting of the council is slated on August 4, which will discuss issues relating to the MSME sector as well as ways to incentivise digital transaction via Rupay cards and BHIM app.