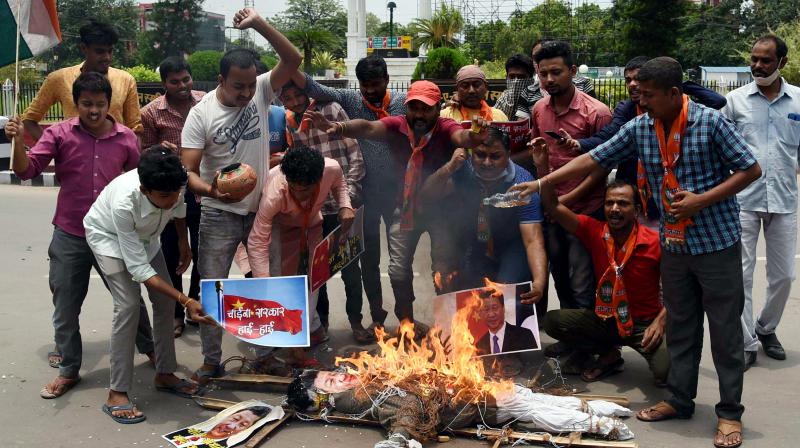 New Delhi: Traders' body CAIT on Monday burnt Chinese goods in Delhi's main market Karol Bagh to demonstrate their resentment and anger against the killing of 20 Indian soldiers in clashes with the Chinese troops in the Galwan Valley last week.

The protesting traders led by Confederation of All India Traders (CAIT) Secretary General Praveen Khandelwal were briefly detained by the police and taken to the Karol Bagh Police Station.

While complimenting Thackeray, Khandelwal said, "This step is in line with the sentiments of the people of the country and will be a lesson to China".

"This demonstration is a reflection of the boiling anger in the hearts and minds of Indian traders and citizens against China's continued antagonism towards India. Due to the prevailing state of COVID-19 pandemic, this demonstration was done by adopting all measures of social distancing and safety precautions," the CAIT said.

Khandelwal said that traders and consumers across the country have shown great enthusiasm and tremendous support for boycott of Chinese goods.

The first highlight of this campaign will be seen on the festival of Rakhi in the month of August when Indian women will tie purely Indian made rakhis to their brothers and boycott China-made rakhis, he added.

The CAIT has urged traders from all over the country to refrain from selling or buying Chinese goods in view of the upcoming festivals.