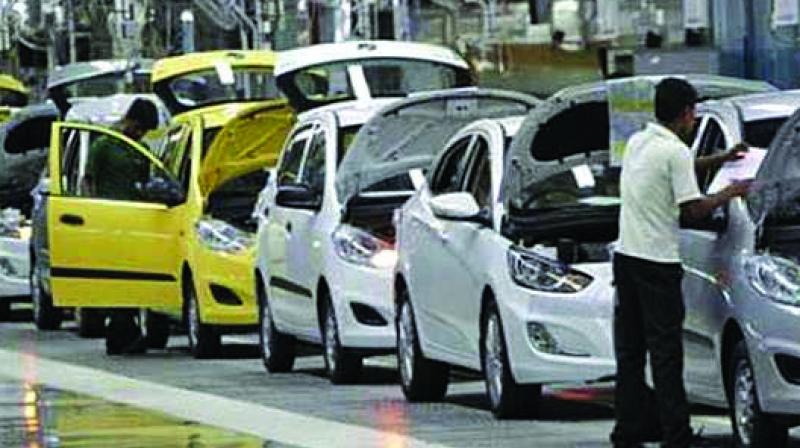 Wadhera emphasised that these are indeed landmark announcements and would certainly help in reviving growth in the economy.

PUNE: While the much-awaited GST cut from the existing 28 per cent for automobiles did not happen, Finance Minister Nirmala Sitharaman’s move to slash corporate tax rates for domestic companies to 22 per cent from 30 per cent, for new local manufacturing companies to 15 per cent and No Minimum Alternate Tax or MAT for companies not availing incentives under Income Tax Act has brightened up the mood in the auto industry.

Industry honchos said this, along with other amendments, is likely to spur demand for contract manufacturing in the auto industry and increase India’s competitiveness versus South Asian countries.

The industry captains and exerts said slashing of corporate taxes along with the recent announcement of 100 per cent Foreign Direct Investment (FDI) may provide additional incentives for the companies to get into contract manufacturing rather than setting up manufacturing plant themselves.

Also, the lower income tax rate of 15 per cent, which is on par with some other South Asian countries, for any new domestic incorporated company from October will attract new ventures into the automobile sector, especially in the electric vehicle (EV) mobility, they said.

Hailing the FM’s move, Rajan Wadhera, President at Society of Indian Automobile Manufacturers or Siam, top trade lobby, the reduction of corporate tax to 15 per cent for new companies making fresh investments from October 1, 2019, will support investment and also FDI in the auto sector.

“This is expected to give a big boost to Make in India for automobile industry,” he pointed out.

“All these set of fiscal measures are expected to uplift market sentiments and improve demand for automobiles,” he pointed out.

Wadhera emphasised that these are indeed landmark announcements and would certainly help in reviving growth in the economy.

These set of major tax reforms are a clear indicator of the government’s commitment to improving business environment to give boost to economic growth.

The Automotive Component Manufacturers Association of India, which contributes 2.3 per cent to India’s GDP, said these measures would give a big impetus to domestic manufacturing and help attract investments in the sector. The announcement made on the onset of the festive season is expected to infuse positive sentiments in the market.

“Reduction in Corporate tax to 22 per cent for existing companies, 15 per cent for new manufacturing companies and relief on account of minimum alternate tax or MAT are steps in the right direction to give manufacturing, investments and economic activity a boost,” Deepak Jain, President at ACMA said.

The measures will also put India in the league of competitive economies in the world, he added.

“We do hope government in consultation with the states will consider ensuring a uniform GST rate of 18 per cent on all auto components. Currently 60 per cent of auto components are at 18 per cent, while the rest are at 28 per cent. A lower rate of GST will not only ensure better compliance but also help curb grey operations in the aftermarket,” Jain said.

Martin Schwenk, MD and CEO at Mercedes-Benz India said corporate tax reduction was a shot in the arm as it is directly correlated to economic growth.

“It will promote investment, help sustain profitability during challenging times and should also improve buying sentiments, thus helping the auto sector in long term,” he pointed out.

Shekar Viswanathan, Vice Chairman and Whole-time Director at Toyota Kirloskar Motor, said the government’s move is a welcome structural change and comes as a great respite to corporates.

“This positive move will lead to further investments in the country as well as create more business opportunities, including the ‘Make in India’ initiative,” he said.

As far as automotive sector is concerned, Viswanathan said on a mid to long term basis, the government should consider the merits of moving towards a carbon (fuel efficiency)-based GST taxation policy which will not only lead to huge fossil fuel savings but will also help in lowering emissions.

Suvodeep Rakshit, Senior Economist at Kotak Institutional Equities, said this would increases the retained earnings of the companies and forms the investible surplus for future, moves India to parity with its regional peers thereby removing one of the issues related to manufacturing and exports, maintains macro prudence by continuing to favour investment cycle rather than consumption cycle.

On the flip side it will negatively impact the bond market as the revenue forgone due to the tax rate reduction will make it difficult to stick to the GFD/GDP budgeted target.