Govt is already committed to spend over Rs 35,000 crore this fiscal for the poor and farmers across the country. 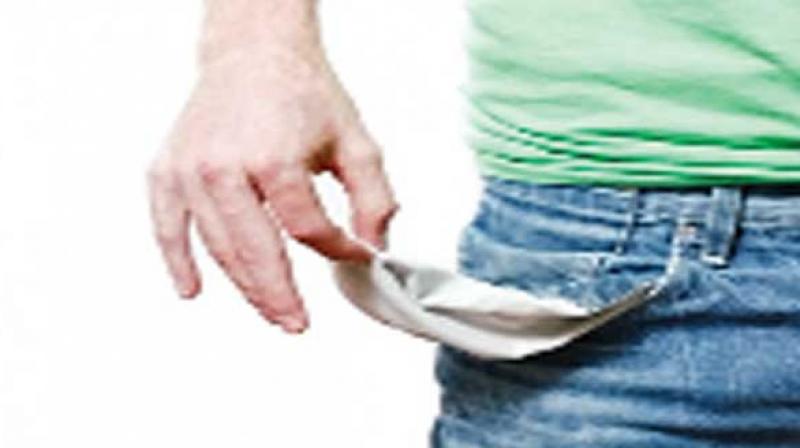 The government had targetted an average monthly GST collection of over Rs 1.10 lakh crore this fiscal.

New Delhi: Ahead of 2019 general elections, the government’s two major people and farmer friendly schemes — Ayushman Bharat and Minimum Support Price (MSP) — are set to face bigger challenge as a dip in revenue collection is starving these programmes of higher fund allocations.

Generally, with Lok Sabha polls round the corner, governments fast-track their spend on social security schemes. However, the issue of fund crunch may be a blockage for the government this year. With government’s coffers drying up, the Prime minister’s Office (PMO) has asked all related ministries to ensure speedy and transparent accumulation and disbursement of funds to the needy by any means before it faces the criticism in the wake of the upcoming polls.

With regard to the two important schemes, the government reportedly intends to collect surplus funds from the central bank to meet all its needs. This issue may be on the top of the agenda for discussion in the RBI board meeting on Monday as well. It is also expected that the government-nominated members on the RBI board may clash either directly or indirectly with Reserve Bank governor and head of the board Urjit Patel in this regard.

A top source in the finance ministry told FC, “As most of the money has been spent on road and infrastructure projects across the country in recent years, the government is likely to witness shortage of funds required to meet the cost of expenses for social security schemes like Ayushman Bharat for the poor and MSP for the farmers. Ahead of 2019 polls, it may pose a great challenge for the government to garner funds for the purpose.”

“In an initial attempt made by the government, it is expected that the PMO, in consultation with the finance ministry, is mulling to use RBI’s surplus funds for the purpose as part of a face-saving move before the upcoming polls. So, the transfer of surplus reserves may be a flash point between the government and the central bank at Monday’s crucial RBI board meeting,” the source added.

As far as these two social welfare schemes are concerned, the government is already committed to spend over Rs 35,000 crore this fiscal for the poor and farmers across the country. The cost of MSP — either through direct procurement of goods or a system of price deficiency payment on the lines of Madhya Pradesh’s Bhawaantar Bhugtan model — is expected to be around Rs 20,000-25,000 crore as budgeted in FY19, while Ayushman Bharat aka National Health Protection Mission that was launched in last September is estimated to cost Rs 12,000 crore in the same fiscal. However, a senior government functionary said, “The government is worried now as it has already spent thousands of crores of rupees on roads and infrastructure projects, whereas incoming revenues in the government’s kitty is at an abysmal low to meet all its needs.”

The government had targetted an average monthly GST collection of over Rs 1.10 lakh crore this fiscal, but GST earnings have a different story to tell. As per government data, in the first year of GST in FY18, the Centre earned a total of Rs 7.41 lakh crore from the tax since its roll out in July 2017, while the average monthly GST collection was Rs 89,885 crore only.

“For this fiscal, the government may not meet its target of over Rs 13 lakh crore as the monthly average is around below Rs 90,000 crore till October this year. If we go by this mathematics, Rs 2-3 lakh crore deficit may pose a great concern for the government,” the government functionary said.