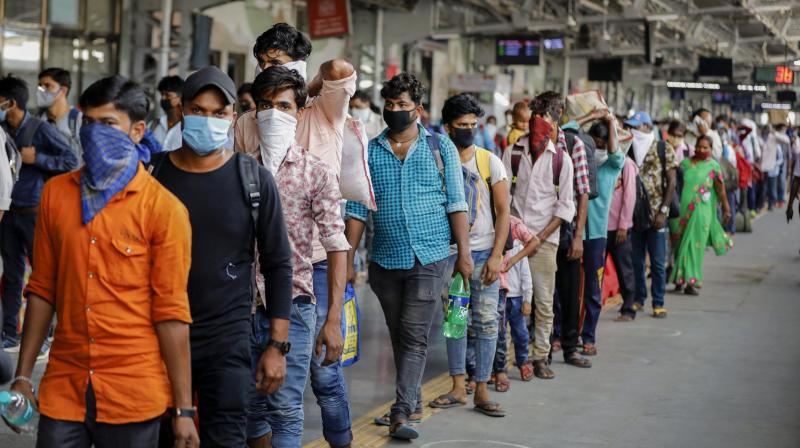 Some real estate developers are sponsoring the return of guest workers and also facilitating their quarantine as per guidelines. (PTI Photo)

Mumbai: Guest workers who had left for their native places after coronavirus lockdowns are either returning themselves or being brought back by their employers to project sites in cities, according to industry players.

Since the country has already entered Unlock 2.0, projects that were stalled due to the lockdown have resumed work, though with just half of their capacity as most of the workers are yet to return.

Engineering firms, which have been hit hard due to non-execution of large infrastructure projects, are taking initiatives to bring back the workforce from states such as Chhattisgarh, Uttar Pradesh, Bihar, West Bengal, Odisha, Jharkhand, Rajasthan and Gujarat.

According to recent data by Mumbai Metropolitan Region Development Authority, thousands of workers have been brought back by engineering firms to complete the metro projects, including Dahisar East-Andheri East metro 7 line.

Among others, real estate players too are taking initiatives to bring back the workforce to complete the stalled projects.

"Workers are coming back as they need jobs. Generally this is the season when they go to their villages for farming or to attend marriages. But they return soon," a labour contractor told PTI.

He said these workers had left cities amid COVID-19 panic, but now they want to return to work since the construction activities have begun.

"While some are returning by trains, others are being brought by contractors," he added.

Indian Railways had said that it transported over 50 lakh migrants to various parts of the country through special Shramik trains.

Meanwhile, some states have started looking for local manpower to bridge the deficit created in the workforce requirements in various sectors.

Some real estate developers are sponsoring the return of guest workers and also facilitating their quarantine as per guidelines.

"We want to complete our projects and deliver them on time to our customers. For that we are taking steps to bring back the labourers. We are not just taking care of their journey and 14 days quarantine, but we are also paying them their wages for those days," Puravankara Group managing director Ashish Puravankara recently told PTI.

Maharashtra, which has already given a call to the sons of the soil, has undertaken initiatives to invite locals to participate in the infra projects undertaken by the government.

"We are in constant communications with industry bodies and various government departments to understand if there is a skill gap. We are working on skilling people locally wherever there is a requirement," Maharashtra Skill Development and Entrepreneurship Minister Nawab Malik had recently said.

He further said that according to the information they are getting, many workers who had left the state to go to their home towns due to the panic over the pandemic are slowly coming back from states like Uttar Pradesh, Jharkhand, Bihar and other places to Mumbai and Pune where they were working.