Business   In Other News  19 Jul 2019  Rains to revive, pick up pace over next two weeks
Business, In Other News

Rains to revive, pick up pace over next two weeks 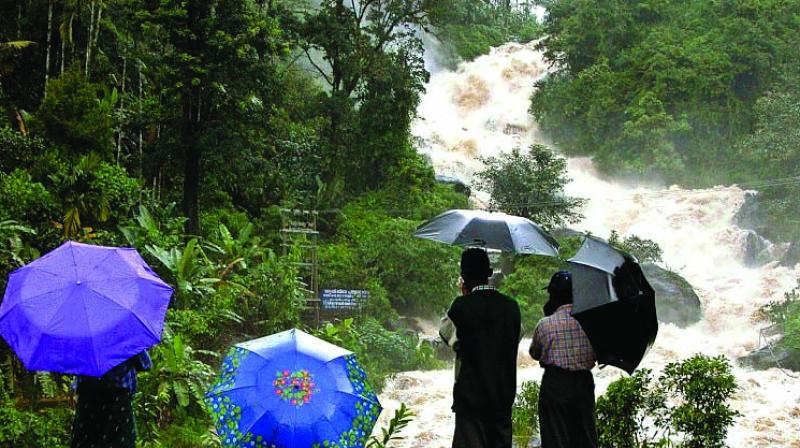 The bad news is that over the next three days there would be less or no rains in many parts of the country, which would widen the all-India rain deficit from the present 17 per cent to 20 per cent from June 1, the start of the monsoon season.

PUNE: The India Meteorological Department, or IMD, on Thursday forecast that the southwest monsoon rains, vital for the Indian economy, are likely to be 'above normal' over the Andaman & Nicobar Islands, Kerala, Tamil Nadu, Andhra Pradesh, Telangana and Karnataka and over many parts of Maharashtra during July 18-24.

However, in the July 25-31 week, rains would increase over most parts of the country with normal to above normal rainfall activity outside most parts of Jammu & Kashmir, north Odisha and the Gangetic West Bengal.

"Rains in monsoon season come in spells. There will be good rains during the last week of July and the first week of August across the country," AK Srivastava, Director at National Climate Centre of IMD at Pune told Financial Chronicle.

He said this would speed up sowing of summer cross in the remaining parts of the country.

"In fact, cumulatively July rains have been good till date facilitating sowing of summer crops and filling up reservoirs across the country. But June rains, apart from delayed by one week, were erratic, taking the deficit to 30-32 per cent," the IMD pointed out.

It said an east-west shear zone is likely to develop across Peninsular India around July 20-21 and the monsoon flow has strengthened over South and adjoining Central Arabian Sea and it is likely to continue for about 5-6 days.

"These favourable meteorological conditions are likely to bring enhanced rains over Peninsular India and adjoining Maharashtra," the forecast said.

It also said rains are very likely at most places with heavy to very heavy at a few places and extremely heavy falls at isolated places over Kerala during July 18-21 and over Coastal Karnataka during July 20 -22.

Fairly widespread to widespread rains with isolated heavy to very heavy falls are also likely over South Interior Karnataka, Lakshadweep over the next 3-4 days.