Business   In Other News  18 Oct 2018  US says it could remove India from currency monitoring list
Business, In Other News

US says it could remove India from currency monitoring list 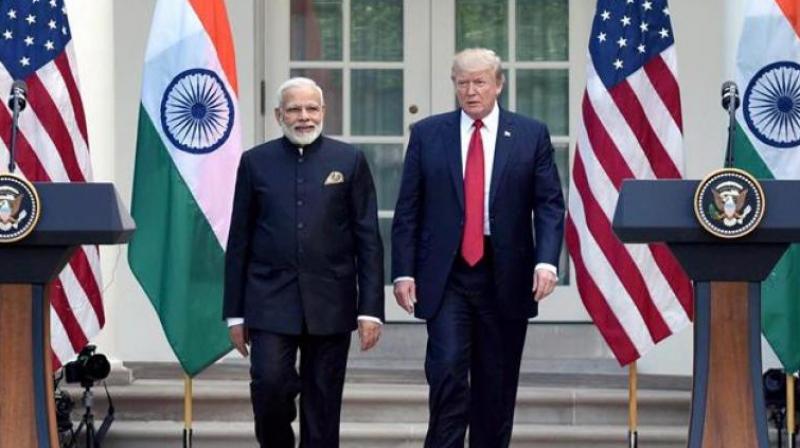 India's current account deficit widened in the four quarters through June 2018 to 1.9 per cent of the GDP.

Washington: The US could remove India from its currency monitoring list of major trading partners, the Treasury Department has said, citing certain developments and steps being taken by New Delhi which address some of its major concerns.

India for the first time was placed by the US in its currency monitoring list of countries with potentially questionable foreign exchange policies in April along with five other countries – China, Germany, Japan, South Korea and Switzerland. The Department of Treasury maintained the same monitoring list in its latest report released on Wednesday but said if India continues with the same practices as in the last six months, it would be removed from its next bi-annual report.

"India's circumstances have shifted markedly, as the central bank's net sales of foreign exchange over the first six months of 2018 led net purchases over the four quarters through June 2018 to fall to USD 4 billion, or 0.2 per cent of the GDP," the Treasury said in its latest semi-annual Report on Macroeconomic and Foreign Exchange Policies of Major Trading Partners of the US.

This represented a notable change from 2017, when purchases over the first three quarters of the year pushed net purchases of foreign exchange above two per cent of the GDP, it said. Recent sales have come amidst a turnaround in foreign portfolio flows, as foreign investors pulled portfolio capital out of India (and many other emerging markets) over the first half of the year, it said.

The rupee depreciated by around seven per cent against the dollar and by more than four per cent on a real effective basis in the first half of 2018, the report said. India has a significant bilateral goods trade surplus with the US, totalling USD 23 billion over the four quarters through June 2018, but India's current account is in deficit at 1.9 per cent of the GDP.

"As a result, India now only meets one of the three criteria from the 2015 Act. If this remains the case at the time of its next report, Treasury would remove India from the monitoring list," the Treasury said.

Observing that India's current account deficit widened in the four quarters through June 2018 to 1.9 per cent of the GDP, following several years of narrowing from its 2012 peak, the Treasury said the current account deficit has been driven by a large and persistent goods trade deficit, which has in turn resulted from substantial gold and petroleum imports. The goods trade deficit has widened out in the first half to 6.4 per cent of the GDP as oil prices have risen.

The IMF projects the current account deficit to be around 2.5 per cent of the GDP over the medium term as domestic demand strengthens further and favourable growth prospects support investment.

India's goods trade surplus with the US was USD 23 billion for the four quarters through June 2018, it said, adding that India also had a small surplus in services trade with the US of USD 4 billion over the same period.

"India's exports to the US are concentrated in sectors that reflect India's global specialisation (notably pharmaceuticals and IT services), while US exports to India are dominated by key service trade categories, particularly travel and higher education," the report said. The Treasury praised India for being "exemplary" in publishing its foreign exchange market intervention.

The Reserve Bank of India (RBI) has noted that the value of the rupee is broadly market-determined, with intervention used only during "episodes of undue volatility," it said.

According to the authorities' data, India was generally a net purchaser of foreign exchange from late 2013 to the middle of 2017, as the RBI sought to gradually build a stronger external buffer in the aftermath of the May 2013 "taper tantrum".

Purchases accelerated in the first half of 2017 amidst strong portfolio inflows to India (and many other emerging markets); as a result, cumulative net purchases of foreign exchange exceeded two per cent of the GDP over 2017, it said.

This mirrored the pattern of the last few years, in which intervention has typically tracked institutional portfolio flows. India maintains ample reserves according to the IMF metrics for reserve adequacy, particularly given that India maintains some controls on both inbound and outbound flows of private capital. As of June 2018, foreign currency reserves stood at USD 380 billion, equal to 3.7 times gross short-term external debt, 8 months of import cover, and 14 per cent of the GDP.

"The rupee depreciated 7 per cent against the dollar in the first half of the year, while the real effective exchange rate also reversed its general uptrend from the last few years, depreciating by four per cent," it said.