Business   In Other News  17 Aug 2018  Traders shut shops to pay homage to Atal Bihari Vajpayee
Business, In Other News

In Delhi all major wholesale and retail markets were closed and the markets wore a deserted look. 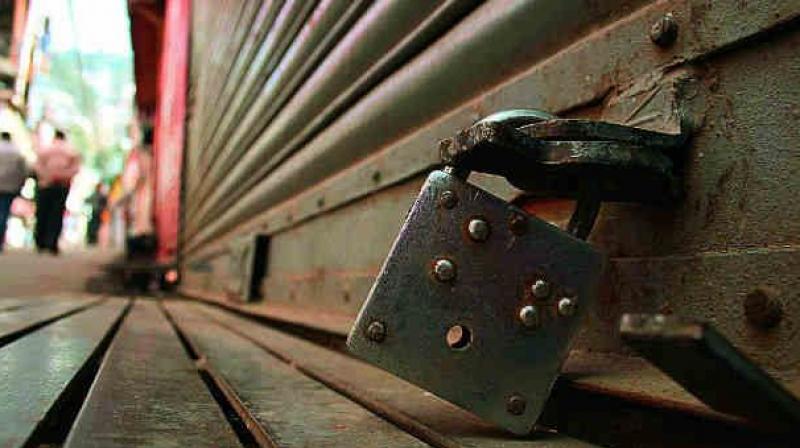 A majority of wholesale markets and several commercial establishments across the country on Friday downed shutters as a mark of respect to former prime minister Atal Bihari Vajpayee.

New Delhi: A majority of wholesale markets and several commercial establishments across the country on Friday downed shutters as a mark of respect to former prime minister Atal Bihari Vajpayee.

The 93-year-old veteran politician who was ailing since long, breathed his last at the All India Institute of Medical Sciences (AIIMS) on Thursday evening. "More than 8 lakh traders in Delhi and about 6 crore traders all over the country kept their business establishments closed and no business activity took place throughout the day," Confederation of All India Traders (CAIT) said in a statement.

CAIT claimed that in Delhi all major wholesale and retail markets were closed and the markets wore a deserted look. Delhi Hindustani Mercantile Association President Anil Singhania said the Chandni Chowk market and other wholesale markets were shut to pay homage to Vajpayee.

When contacted, President of Uttar Pradesh Traders Association Sanjay Patwari said between 60-70 per cent of all wholesale and retail markets in the state are closed in view of Vajpayee's demise.

Convenor of CAIT's West Bengal Chapter Raja Roy said nearly 70 per cent of wholesale markets and retail shops were shut in the state whereas all major showrooms were also closed. Founder and President of Tamil Nadu Consumer Products Distributors Association Ganesh Ram said many retail outlets across the state were shut.

President of Marble Traders Association in Chandigarh Harish Garg said 80-85 per cent of retail shops in the city as well as surrounding areas in Punjab were shut. President of Jammu Traders Federation Neeraj Anand said while wholesale markets remained open, 40-50 per cent retail shops were closed.

President of India Bullion and Jewellers Association in Bihar Ashok Kumar Verma said all wholesale markets as well as retail establishments in the state were shut to pay homage to Vajpayee.

President of CAIT's Gujarat Chapter Pramod Bhagat said 70 per cent wholesale and retail markets were closed in the state whereas some small retail shops remained open.

Head of CAIT's Chhattisgarh state unit Amar Parwani said between 30-40 per cent wholesale as well as retail shops in the state have voluntarily downed shutters to mourn the death of the former prime minister.

President of Odisha Chapter of CAIT Sudhakar Panda said wholesale markets in the state were closed but the retail markets remained open.

"The response to the Bandh has been mixed in Jharkhand with around 60 per cent of commercial establishments in major revenue districts and 70 per cent in Ranchi being closed," said Suresh Sonthalia, General Secretary of CAIT in the state.

Convenor of CAIT Chapter in Madhya Pradesh Radhey Shyam Maheshwari said while the wholesale markets in Gwalior where Vajpayee was born were completely shut, most of the commercial establishments in Bhopal and rural parts of the state were closed, whereas some retail shops are open.