Business   In Other News  17 Aug 2018  India will get 27 per cent richer by increasing women workforce
Business, In Other News

India will get 27 per cent richer by increasing women workforce

The Indian economy has grown around seven percent for the last two decades. 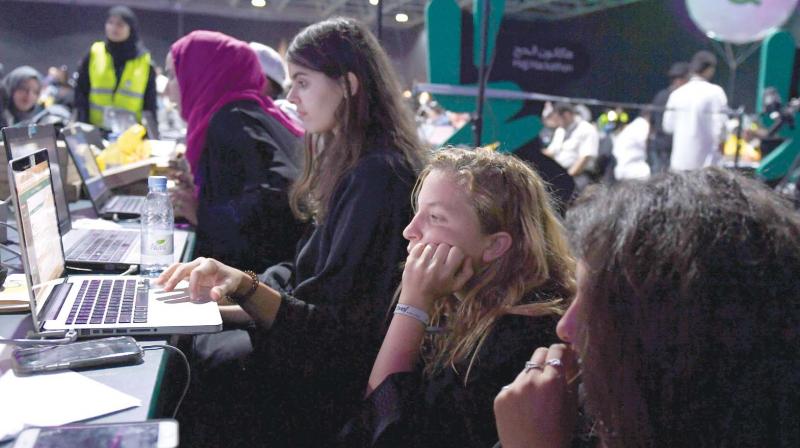 One of the key factors contributing to this struggle is the early marriage of women. (Photo: AFP)

New Delhi: Prime Minister Narendra Modi recently quoted at an event that 'financially empowered women are a bulwark against societal evils.' Rajiv Ranjan Singh, CEO, Karvy Stock Broking Ltd seconds his opinion and so does the data from the International Monetary Fund (IMF) which reported that India could be 27 percent richer if more Indian women were involved in the workforce.

Indian women struggle with huge disadvantages in most walks of life, resulting in low participation in mainstream social, political and economic activities. The government initiative Beti Bachao, Beti Padhao and likes have effectively soared the gender gap in literacy and school attendance to nearly 90 girls per 100 boys from 60 girls per 100 boys recorded in 2001 and the gap between men and women voters have narrowed over time.

One of the key factors contributing to this struggle is the early marriage of women. The average age of women getting married in India is 19 years, leaving little scope for her to complete proper education and gain any social and financial independence.

To add to this, domestic violence and abuse is a common problem faced by women. Their lack of education and financial dependence on husband topped with the social stigma of public dishonor trap them in the atrocious environment.

Despite these drawbacks, a quarter of the current women population have made it to the workforce, but they deal with issues like sexual harassment at work and the social pressure of balancing their work life, personal life and social life at par. Another reason women in the workforce withdraw from their career is gender discrimination in the form of employment and wages.

"We need strong policies and government reforms to retain women in the workforce and attract new women to join it, especially in the urban areas which offer more scope for work," said Singh.

Bangladesh, India's neighbour and offspring, has emerged as a perfect example in this case over the last decade, securing the 47th position in The Global Gender Gap Report where India stands at 108th among 144 countries. The number of women working in Bangladesh has remarkably soared from 16.2 million in 2010 to 18.6 million in 2016-17.

Women work more than men globally, performing on an average 75 percent of the world's unpaid and domestic work, which is valued at 13 percent of the global Gross Domestic Product (GDP) according to a United Nations report.

Women in India do 90 percent of the unpaid and domestic work, the highest proportion in the world. The report claims, if this unpaid work is included in the national account, it can represent nearly 50 percent of the GDP. But Indian women are by large expected to be homemakers and lack the social support to get employed.

"If India wants to cross a double-digit GDP, we need to change the mindset of society and make it more supportive towards the idea of women working outside their household," he added.

Malala Yousafzai has aptly emphasised that there is a high need to empower women and expand their education, but simultaneously skill provision and economic upliftment of women is also required, but most importantly an attitudinal change is required to achieve women empowerment.

There are no disagreements over the fact that the Indian women have considerably progressed in the last seven decades post independence and the government also has made efforts in improving their state.

But it is sad that India is still a male-dominant society and is struggling with many social evils and lacks a perspective to view the status of women in society.
Even in the current times, women are regarded as liabilities instead of assets and a working woman is merely considered as a better bargain in the marriage market. This has to change to empower women in reality.

Factually, 23 women CEOs across the globe leading 500 fortune companies, while amongst the top 100 companies of Indian origin, there are merely four women CEOs.

It is also commendable that the Indian government has introduced and implemented several policies like Beti Bachao ,Beti Padhao, Sukanya Samriddhi Account, Pradhan Mantri Ujjwala Yojana, Mahila Shakti Kendra, Maternity Benefits Program, etc. which have made a significant impact on their lives.

But it is notable that only a few reforms are made to make women financially independent or to bring them into the workforce. Indian women have low political participation; only 12 percent of women are seated in both upper and lower houses of the parliament, according to the Inter-Parliamentary Union. And it is extraordinary that a bill demanding 33 percent reservation of seats for women in Lok Sabha is pending for nearly two decades now.

"We, as a nation, are actively looking at achieving double-digit GDP, entering the USD 5 trillion economy and doubling our word trade contribution, but it is hardly practical without one of the major pillars of the economy: women. As Swami Vivekananda had quoted, 'There is no chance for the welfare of the world unless the condition of women is improved; it is not possible for a bird to fly on only one wing.' While it is agreeable that it is difficult to change the culture of disregard for women deep-rooted in the Indian society, measures need to be taken for it. The government is required to take a stand and introduce policies that would make women financially independent and reduce the hurdles in her path towards development," concluded Singh. (Businesswire-India)