Business   In Other News  16 Mar 2018  India needs to grow 13 per cent to hire all job-seekers
Business, In Other News

Start-ups have absorbed a significant portion of low-skilled labourers. 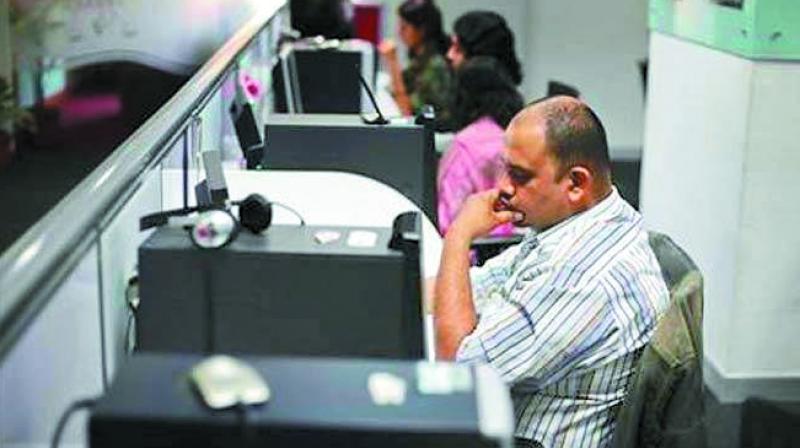 Mumbai: With India’s labour force expected to expand to 580 million by 2024-25 from 480 million in 2015-16, HDFC Bank said the Indian GDP will have to grow by as much as 13 per cent on average over the next decade to absorb the expanding labour force.

In the last five years, a report on ‘Job Creation’ released by HDFC bank noted that the employment absorbing power has been close to 0.17, implying that for every 1 per cent increase in GDP, employment has grown by 0.17 per cent.

While creating enough jobs in the system will not be easy, the report highlighted two options before policy makers to address the issue, either to achieve higher GDP growth, which is a tall task or push up elasticities (employment absorbing power), which is more achievable in the medium term.

According to the report, the employment absorbing power of certain service sector categories like the “other services” component that includes coaching, recreational and sports activities, hair dressing, tailoring and persons employed in households among others has been much higher than even conventional labour intensive sectors such as manufacturing.

Apart from services, two other sectors that have high elasticities are utilities and construction, both of which saw employment grew by more than 10 per cent for every 10 per cent increase in output. “Further, there is a part of the service sector where job opportunities are rising at an exponential rate but are overlooked by current employment analysis. These are the new digital ecosystems and start-ups. Not only are these systems (e-commerce and online aggregators) creating direct job opportunities but they are also boosting opportunities in allied ecosystems such as logistics, warehousing, IT and ITeS,” it said.

A Mckinsey report said that employment in cab hailing services such as Uber or Ola alone increased from 0.3 million in 2015 to over 1 million in 2018.

Besides creating employment opportunities, the digital and start-up ecosystems have also been able to absorb a significant number of relatively low skill workers (like delivery services) and provide them with access to the formal economy (banking services and credit).

Unemployment rate has risen from 3.3 per cent in 2011-12 to 3.7 per cent in 2015-16. The labour force has expanded by around 11 million each year since 2010-11, although employment additions have been close to 8 million with about 80 per cent of the additions in the informal sector.