Business   In Other News  16 Feb 2019  Re-skilling initiative gets warm welcome from global businesses
Business, In Other News

Global enterprises said they were willing to retrain 17.2 million people as part of the initiative, called closing the Skill Gap. 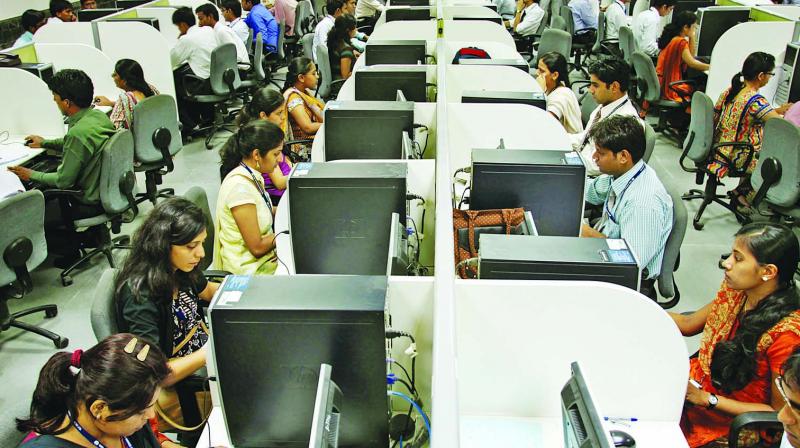 Indian tech firms have also started investing their time, money and resources to train their people.

Bangalore: A 2017 joint initiative by World Economic Forum and Tata Consultancy Services to re-skill or up-skill 10 million people in the global workforce by 2020 has received overwhelming response from leading businesses around the world.

Indian tech firms have also started investing their time, money and resources to train their people. As per industry estimates, over one million tech workers have gone through reskilling or upskilling training in India in the last two years and 30 per cent of these have already migrated to newer areas, including deep technology, which comprises Artificial Intelligence, Machine Learning, Big Data, Internet of Things, Blockchain and Data Analytics.

The $160-billion Indian software industry, which employs an army of around 4 million, is still in the throes of a skill crisis and more work has to be done in the country to make millions of existing workers truly employable and billable. The country’s top five tech players together employ over a million people.

Commenting on the quantum improvement made by Closing the Skills Gap coalition, Surya Kant, president, North America, UK and Europe at TCS, said, “Our collaboration with the World Economic Forum is driving systemic change to empower people with 21st century skills to participate in new opportunities created by the Fourth Industrial Revolution. We are proud of the transformative impact of the initiative and encourage more businesses and countries to join this collective effort to realise the vision of a more inclusive and prosperous future for all.”

According to Saadia Zahidi, member of the World Economic Forum’s managing board and head of its centre for the New Economy and Society, “The new world of work in the Fourth Industrial Revolution is rapidly becoming a lived reality for millions of global workers and companies. The inherent opportunities for positive outcomes for workers, the economy and society are enormous, yet crucially depend on bold action from all concerned stakeholders to instigate reform in education and training systems to prepare workforces for the skills of the future.”

As per Raman Roy, former chairman of Nasscom and CEO and founder of business process management firm Quatrro, Indian tech players have been very proactively responding to customer and market demands for reskilling and non-linear approach of growth.

“Customers want tech firms to broadbase their knowledge base, hone talent through training and reskilling, recalibration and save costs through a non-linear approach of revenue scale up. It is clear that reskilling, productivity enhancement, automation, newer products, platform and digital solutions are going to be the future drivers of the industry,’’ he said.

The apex body Nasscom had earlier said some 40 per cent of Indian tech workforce requires reskilling, over the next five years to stay relevant to market requirements. The apex body in association with Boston Consulting Group has a tie-up with 20 large tech firms in India to train 200,000 existing workforce.

The WEF is also expanding its national public-private collaboration task forces to prepare countries for readying people for work in the future. Argentina, India, Oman, and South Africa are already under this programme while 10 more economies join the bandwagon by end of 2020.

TCS has a commitment to retrain 1.2 million people: upskilling and reskilling its current workforce, preparing today’s students for 21st century careers, and empowering women, ethnic minorities and marginalised groups. As of now, the company has trained over 292,000 employees with new digital skills, who are helping many of its global customers in digital transformation journeys.