Built at a cost of Rs 1350 crore, the plants are located in Rajasthan (two plants), Maharashtra and AP. 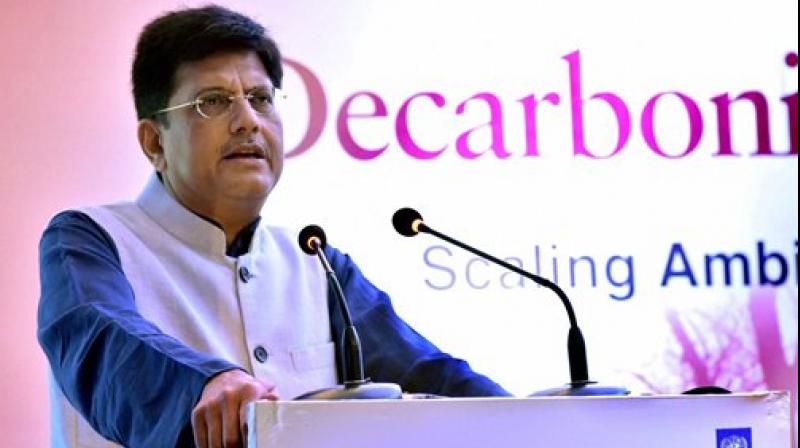 Bhubaneswar: Union Power and Coal Minister Piyush Goyal today dedicated to the nation 4 wind power plants built by NALCO and annuonced an expansion plan for the aluminium major to raise its capacity to 1 MTPA.

"We are taking concrete steps to increase production of NALCO. There is a major expansion programme to raise its capacity to 1 million tonne per annum," Goyal said while dedicating the wind units with a total capacity of 198 MW.

Built at a cost of Rs 1350 crore, the plants, unveiled at a function here, are located in Rajasthan (two plants), Maharashtra and Andhra Pradesh, while the company plans more wind power plants of 120 MW besides installing solar units.

Stating that NALCO's production remained stagnant for a long time and the company has also mooted establishing an aluminium plant in Iran, the minister said the focus of NDA government was to increase production in Odisha itself.

Goyal said expansion of Nalco would also provide employment to thousands of local youths who were not needed to migrate elsewhere in search of jobs. The revenue of the state would also go up substantially.

As part of the expansion plan, the capacity of Nalco's smelter at Angul is being increased from .46 mtpa to one mtpa with an investment of Rs 20,000 crore, a senior company official said.

Another greenfield plant with .6 mtpa capacity is also proposed to be set up at nearby Kamakshya Nagar, he said adding work was already underway to inrease the capacity of

alumina refinery at Damanjodi by one mtpa with an investment of Rs 5400 crore. Its capacity now is 2.275 mtpa.

Referring to switch over to auction mode for mines, he said Odisha would earn huge additional revenue from this which could be utilised for many welfare and developmental schemes.

The NDA Government is now focussing on speedy progress of eastern part of the country, particularly Odisha, he said adding that the production of Mahanadi Coalfields Ltd (MCL) should also be increased as it was affected due to various reasons.

Stating that different union ministries have launched ambitious projects for rapid development of Odisha, Goyal said while NTPC was taking steps for improving power position, an inland waterways project was taken up from Talcher to the port town of Paradip.  Similarly, a host of petroleum and petro-chemical projects were coming up.

Union Tribal Affairs Minister Jual Oram, who was the chief guest, said production of NALCO should increase in the interest of the state and its people.

An MoU was signed by NALCO with IIT-Bhubaneswar on Research and Development and another with MIDHANI on high value products in the presence of the union ministers. An exhibition on celebration of Centenary of Champaran Satyagraha was also organised on the occasion.