Business   In Other News  14 Jul 2020  India-EU virtual summit to give bilateral trade negotiations major push
Business, In Other News 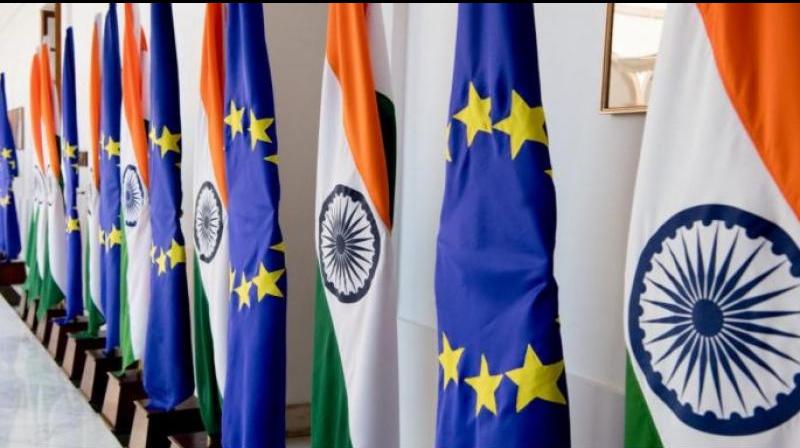 Global issues and tensions are expected to figure on the agenda for the 15th India-European Union (EU) Virtual (video-conference) Summit on Wednesday. (Photo- Twitter)

New Delhi: Global issues and tensions are expected to figure on the agenda for the 15th India-European Union (EU) Virtual (video-conference) Summit on Wednesday, Government sources indicated on Monday.

With tensions between the US and China at a global level, the virtues of multilateralism are expected to be acknowledged. It is therefore being seen as probable by observers that the recent Sino-Indian military tensions may well come up for discussion. But India and the EU are essentially expected to focus on their bilateral strategic ties including the important issue of trade at the Summit.

Global responses to the Coronavirus pandemic will figure prominently during the Summit and this may well be significant, given the criticism in the West over China’s initial handling of the pandemic at Wuhan. EU member nations like Italy, Spain and France were among the worst affected globally by the Pandemic.

Prime Minister Narendra Modi will represent India while the EU will be represented by President of the European Council Charles Michel, and President of the European Commission Ursula von der Leyen. The Summit was to have been originally held in the Belgian Capital Brussels in March this year but was postponed due to the Covid pandemic. The previous (14th) India-EU Summit had been held in October, 2017 in New Delhi.

It may be recalled that the Ministry of External Affairs (MEA) had said last week that the “Summit will review India-EU cooperation covering political & security relations, trade & investment and economic cooperation” and “is also expected to discuss developments around the Covid-19 pandemic and contemporary global matters of interest to both sides”. Both sides may explore ways to once again begin talks on a free trade agreement on which a “pause” button had been pressed in the past.

It may also be recalled that in February this year, External Affairs Minister (EAM) S. Jaishankar had travelled to Brussels and had met top EU functionaries as well as certain Members of the European Parliament (MEPs) during which he had strongly defended the Indian position on the Kashmir issue and situation in J&K as well as on the Citizenship Amendment Act (CAA) which could both be raised now by the EU during the Summit. The top EU dignitaries the EAM had met then included Mr. Michel, President of the European Council of Heads of Government of the 27 member states of the EU. The recent Sino-Indian military tensions at the border could also come up during the discussions.

EU sources had said last week that the Summit will be an opportunity to strengthen the EU-India Strategic Partnership, based on “shared principles and values of democracy, freedom, rule of law, and respect for human rights, aiming at delivering concrete benefits for the people in the EU and India”. EU sources also said bilateral, regional and global issues are expected to be discussed and that “leaders are expected to “discuss (bilateral) cooperation in security, climate, environment, trade and investment, digital economy and connectivity”.

EU sources meanwhile also said the leaders would discuss “global cooperation and solidarity to protect lives, to mitigate the socio-economic consequences and to strengthen preparedness and response capacities” in view of the Coronavirus pandemic that also severely affected EU countries including Spain, Italy and France. Leaders will also discuss global and regional issues and are "expected to reiterate their determination to promote effective multilateralism and a rules-based multilateral order, with the United Nations (UN) and the World Trade Organisation (WTO) at its core".