Business   In Other News  09 Mar 2020  Yes Bank won't be merged with SBI: Prashant Kumar
Business, In Other News

The RBI has taken control of Yes Bank, after the lender failed to raise the capital it needs to stay above mandated regulatory requirements 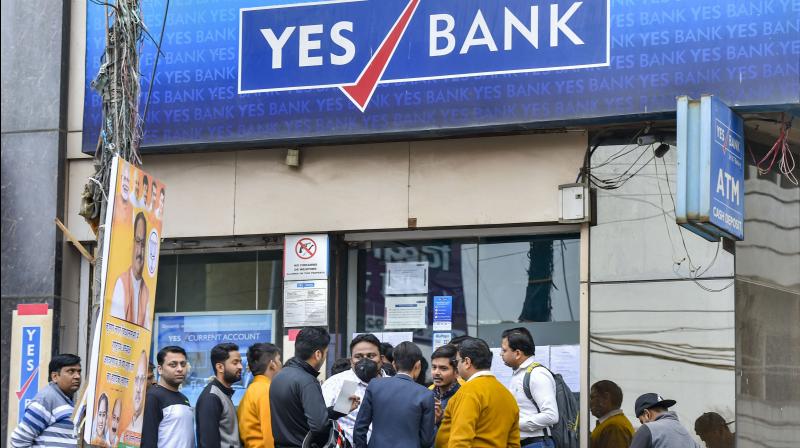 Mumbai: India’s Yes Bank will not be merged with State Bank of India, which is set to infuse funds in the beleaguered lender, the newly appointed administrator leading the rescue plan said in a television interview on Monday.

“There is absolutely no question of a merger,” Prashant Kumar, the administrator, told the CNBC TV18 channel.

The Reserve Bank of India (RBI) on Thursday took control of Yes Bank, after the lender -- which is laden with bad debts -- failed to raise the capital it needs to stay above mandated regulatory requirements.

Placing Yes Bank under a 30-day moratorium, the central bank imposed limits on withdrawals to protect depositors and said it would work on a revival plan. The move spooked depositors, who rushed to withdraw funds from the bank.

Kumar, a former finance chief at SBI, assured depositors their money was safe and that the moratorium on Yes Bank might be lifted much before the deadline on April 3 and normal banking operations might resume as early as Friday.

SBI Chairman Rajnish Kumar said on Saturday that the state-run bank would need to invest up to 24.5 billion rupees ($331 million) to buy a 49% stake in Yes Bank as part of the initial phase of the rescue deal, adding that the survival of troubled lender was a “must”.

RBI-appointed Yes Bank administrator Prashant Kumar on Monday said the lender is working to restore all banking services for its customers as as soon as possible.

“I think for us, the first priority is the customers and how to provide the seamless business to our customers and like you must have seen on the very first day, all our ATMs were up for the customers,” Kumar said in an interview to a TV channel.

He said, since Saturday evening even the ATMs of other banks were available for customers for cash withdrawal.

“And in our branches, our staff is reaching out to customers. They are dealing with their issues. I would also like to take this opportunity to thank all our customers who have really cooperated with us, who have shown lot of patience. And I think this is the faith in the brand of Yes Bank,” Kumar told CNBC TV 18.

Yes Bank customers have been restricted with a cash withdrawal limit of Rs 50,000 till April 3 ever since the Reserve Bank superseded the board of the bank on March 5, 2020 and appointed Kumar - a former SBI executive - as its administrator.

Kumar also assured that for the remaining days of the moratorium on Yes Bank, the bank staff is working hard so that all banking services could be restored at the earliest.

The RBI restriction on Yes Bank has also severely impacted other financial market transactions such as forex, credit card, digital payment, among others.

“All of us are working so that the entire banking service is available to our customers as soon as possible,” Kumar said.

Even before the RBI action, the Mumbai-headquartered lender had deferred announcement of its earnings for the third quarter of 2019-20 to March 14 or before.

“I think we are going to declare our results on March 14th,” Kumar said.

In an exchange filing on Saturday, Yes Bank had said, “the administrator will consider and take on record the unaudited financial results of the bank, for the quarter and nine months ended on December 31, 2019 along with limited review report thereon by the statutory auditors of the bank on Saturday, March 14, 2020.”

To a question that the bank's capital requirement is much higher than what SBI will bring up with its 49 per cent stake buy in the bank for Rs 2,450 crore, Kumar said the clarity would come with the board meeting when it announces the earnings for the third quarter.

“What SBI has shown interest is of 49 per cent..definitely there would be more requirement. We are in talks with like minded investors. SBI is also doing that part.

“So we are quite hopeful that in a couple of days the issue about the capital requirement will be taken care of,” Kumar said.