Business   In Other News  08 Apr 2020  400 million Indian workers may sink into poverty due to covid19: UN
Business, In Other News

400 million Indian workers may sink into poverty due to covid19: UN

In India, with a share of almost 90 per cent of people working in the informal economy, are at risk of falling deeper into poverty 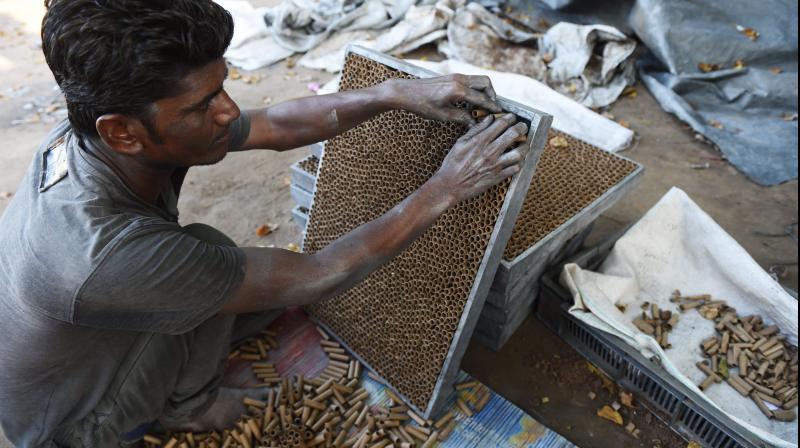 An Indian worker preparing firecrackers at a workshop on the outskirts of Ahmedabad. (AFP PHOTO)

New York:  About 400 million people working in the informal economy in India are at risk of falling deeper into poverty due to the coronavirus crisis which is having "catastrophic consequences", and is expected to wipe out 195 million full-time jobs or 6.7 per cent of working hours globally in the second quarter of this year, the UN's labour body has warned.

"Workers and businesses are facing catastrophe, in both developed and developing economies. We have to move fast, decisively, and together. The right, urgent, measures, could make the difference between survival and collapse," ILO Director-General Guy Ryder said on Tuesday.

Worldwide, two billion people work in the informal sector (mostly in emerging and developing economies) and are particularly at risk, the report said, adding that the covid-19 crisis is already affecting tens of millions of informal workers.

"In India, Nigeria and Brazil, the number of workers in the informal economy affected by the lockdown and other containment measures is substantial," ILO said.

"In India, with a share of almost 90 per cent of people working in the informal economy, about 400 million workers in the informal economy are at risk of falling deeper into poverty during the crisis. Current lockdown measures in India, which are at the high end of the University of Oxford's covid-19 Government Response Stringency Index, have impacted these workers significantly, forcing many of them to return to rural areas," it said.

The report said the disruption to the world's economies caused by the covid-19 pandemic is expected to wipe out 6.7 per cent of working hours globally in the second quarter of this year  the equivalent of 195 million jobs worldwide.

Huge losses are expected across different income groups but especially in upper-middle income countries (7.0 per cent, 100 million full-time workers), far exceeding the effects of the 2008-9 financial crisis, the report warned.

"The covid-19 pandemic is having a catastrophic effect on working hours and earnings, globally," it said.