Business   In Other News  07 Jul 2017  Hyderabad airport gets AA debt rating from Icra
Business, In Other News 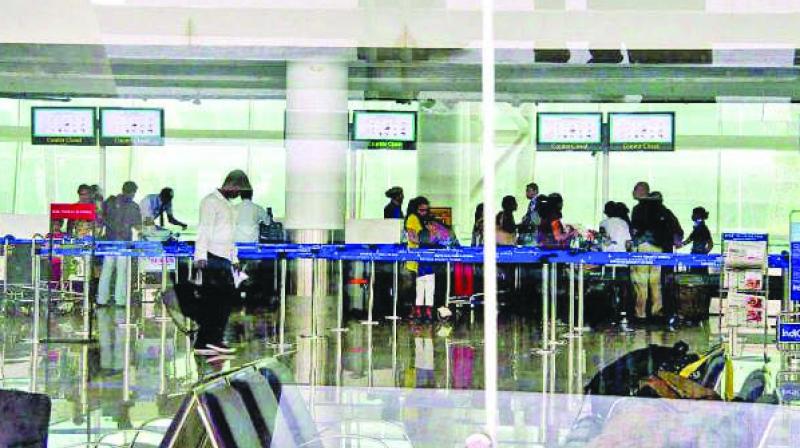 Hyderabad: Icra has upgraded the long-term rating for the debt of GMR Hyderabad International Airport Limited (GHIAL) to AA from AA- with stable outlook.

The rating is for the airport's Rs 1,667.36 crore fund-based facilities and Rs 11.24 crore unallocated limits. Also, the Icra has re-affirmed the short-term rating assigned to the Rs 75 crore non-fund based limits at A1+.

The rating upgrade reflects GHIAL's robust cash accruals and strong liquidity position as reflected by a liquid surplus of Rs 641.75 crore as on March 31, 2017, the agency said.

The traffic growth at GHIAL was the highest among the major private airports in FY17, with air traffic movement growing by 24 per cent and passenger traffic by 22 per cent.

Overall, the passenger traffic grew at a CAGR of 15.8 per cent during FY13-FY17 to 15.1 million and the air traffic movement at CAGR of 9.5 per cent to 1,31,000 during the period. "The rating also takes into account the strengths arising from the regulatory framework which allows efficient cost recovery as a part of the tariff from the users. This, together with GHIAL's strategic position significantly mitigates the concerns on revenues," Icra said.

"The variation in passenger traffic due to economic cycles, which may lead to temporary traffic de-growth and in-turn revenue decline is compensated by truing up for the shortfall in the next regulatory period, albeit with a lag.

"This apart, financial support from the Government of Telangana in the form of development grant and interest free loans with deferred payment terms, modest revenue-sharing terms with the Government of India are also comforting factors," the rating agency said.

GHIAL's passenger throughput has exceeded the terminal capacity leading to constraints during the peak hours.

To cater to the present level of growth, the airport operator has undertaken various de-bottlenecking measures such as re-orientation of security checks, kerbside expansion, ramp expansion and de-peaking of passengers to increase asset sweating.

Icra said the rating is constrained by the substantial capex requirement to augment the airport's capacity.

Currently, the airport is operating at more than 100 per cent of its designed capacity of 12 million passengers per annum.

GHIAL plans to undertake the next phase of capex (modular expansion), which is to be completed by 2021 to increase the capacity to 20 million. The total capex (including terminal expansion, re-carpeting of runway and regular maintenance) is estimated at Rs 2,512.5 crore during FY17-FY21. This is proposed to be funded through debt of Rs 1,715 crore and internal accruals of Rs. 797.50 crore, Icra added.