As per the data, there has been almost three-fold jump in onion prices from the year-ago period. 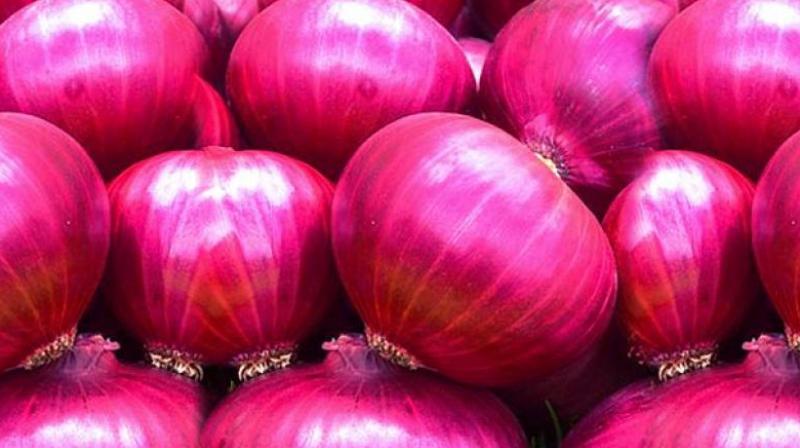 Onion prices are ruling high for more than a month in Delhi-NCR due to supply disruption following heavy rains in growing states like Maharashtra. (Photo: File)

New Delhi: The retail price of onions has risen by 45 per cent in the last one week to Rs 80 per kg in the national capital despite the central government's measures to boost supply and contain price rise.

The rates stood at Rs 55 per kg on October 1, as per the official data. Onion prices are ruling high for more than a month in Delhi-NCR due to supply disruption following heavy rains in growing states like Maharashtra.

As per the data, there has been almost three-fold jump in onion prices from the year-ago period. Onions were sold at Rs 30-35 per kg in retail markets in November 2018. Not only in Delhi, onion prices are ruling high in most of the consuming areas across the country. However in the national capital, onion has been a "politically sensitive" commodity.

"The prices should moderate in the coming days as the arrival of fresh crop has begun in Maharashtra, Rajasthan and Karnataka. But untimely rain has affected the transportation to the consuming areas," a senior Consumer Affairs Ministry official told PTI. In Delhi, the availability of onion is being improved from the central buffer stock handled by co-operative Nafed.

The buffer stock has been given to Mother Dairy for retailing at a cheaper rate of Rs 24.90 per kg through its 400-odd Safal outlets to provide relief to consumers, he said. However, some of the Safal outlets are running out of stock and poor consumers are returning with disappointment.

"I waited for two hours in the queue to buy onions from Safal but when my turn came the stock got over," said a housemaid Mumtaz who was waiting outside the Safal outlet at Jangpura Extension.

The price rise has affected to an extent that in some localities, the customers of a particular colony are requesting the Safal owners not to sell the commodity to outsiders. Meanwhile, the government has decided to facilitate private imports from Afghanistan, Egypt, Turkey and Iran and even liberalise phytosanitary and fumigation norms.

Private traders have informed the government that 80 containers of imported onions have reached Indian ports and 100 containers are in high seas and can be diverted to India, the official said.