Business   In Other News  06 Oct 2017  I don't give much thought to rich list: Kiran Mazumdar-Shaw
Business, In Other News

I don't give much thought to rich list: Kiran Mazumdar-Shaw

The chairperson and MD of Biocon Ltd with a USD 2.16 billion fortune, was ranked 72nd on Forbes' 'India Rich List 2017'. 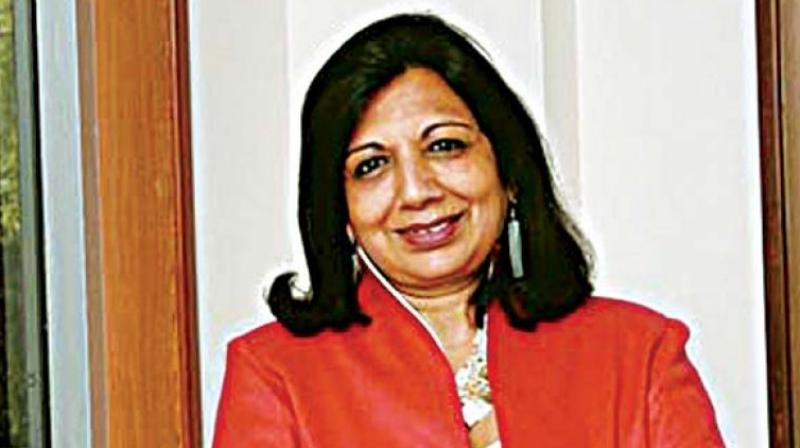 Biotechnology pioneer Kiran Mazumdar-Shaw has not given much thought to the latest list of 100 rich persons in India in which she also figures.

Hyderabad: Biotechnology pioneer Kiran Mazumdar-Shaw has not given much thought to the latest list of 100 rich persons in India in which she also figures, but says it reflects the state of the economy.

The chairperson and managing director of Bengaluru- headquartered Biocon Ltd, with a fortune of USD 2.16 billion, was placed at the 72nd position on Forbes magazine's annual 'India Rich List 2017'.

"A rich list is an annual map of wealth creation largely based on stock value and real estate. I don't give it much thought other than it reflects the state of the economy," she told PTI.

Reliance Industries chief Mukesh Ambani emerged as India's wealthiest for the 10th straight year as his net worth swelled to USD 38 billion (nearly Rs 2.5 lakh crore) while the wealth of 100 richest rose by 26 per cent despite economic hiccups.

More than four-fifths of those who kept their spot on the list from last year saw their wealth rise, with 27 listees adding USD one billion or more to their net worth.

However, a dozen have turned poorer than a year ago, with half of them from the pharmaceutical sector, which has been plagued by challenges.

"Since there is volatility in both (stock value and real estate), the list sees gainers and losers," said Mazumdar-Shaw, who also holds key positions in various industry, educational, government and professional bodies.

As many as seven women, including O P Jindal group's chairperson Savitri Jindal, figure in the list.